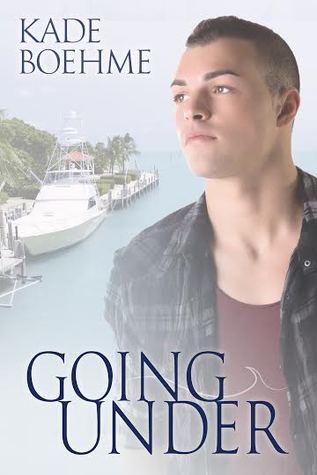 Blurb: Ex Coast Guardian Kyle Bevins is a joker, a friend, and unlucky in love. His friends know he’s a good guy to turn to if for nothing other than a much needed laugh, but he rarely heeds his own advice. He’s content as the new co-owner of his friend’s charter fishing company in Pensacola Beach, Florida, but he’s missing the companionship of having a significant other and tired of the old hookups.

Eddy Jiminez is unlucky, period. He’s been dealt most every negative consequence of being gay. He’s also an ex-con, so he figured he’d play it safe, keep working hard and trying to forget that it was men he craved. But when he meets Kyle, he can’t stop going back for more, but tired of the lies and hurting, he doesn’t want to give Kyle up.

Kyle would do anything to keep Eddy from drowning again, so he decides to see him safely into the big world of being Out but a past connection may ruin everything. Will there be a second chance for both of them, or will their relationship go under?

Review: Well, I guess the honeymoon couldn’t last forever. Kade Boehme and I have been on a pretty good run…but, I’m sorry to say this one just wasn’t my favorite. I really enjoyed Keep Swimming and thought Kyle was a great secondary character in that one, so when I found out that Going Under was Kyle’s book, I was looking forward to it.

Kyle is funny, bright, a loyal friend, and really seems to have his act together. What he feels he is really missing, though, is someone to share his life with. He sees his friends Heath and Cary, who I still completely adore, how happy they are in their domesticated bliss, and he desperately wants that for himself.

While at a favorite hangout one night with Heath and Cary, Kyle runs into Eddy Clarke. Eddy looks a little rough and tumble – closely shaved head, rugged appearance, what appear to be prison tats – but, Kyle is definitely intrigued by him, and they end up going back to Kyle’s place together for a quick romp.

Here’s where things got a little rocky for me…I’ve talked about insta-love before in reviews, and in many instances, for whatever reason, I have felt it to be plausible; the author is somehow able to make it work. It can definitely be an issue in shorter stories. It’s difficult to create that foundation, to give the reader something to root for, and, in the case of Kyle and Eddy, I felt like there was no build-up at all for these guys. That’s not to say that the characters didn’t work at all. I really like both Kyle and Eddy – individually and together later on in the book – but, things just progressed too quickly and made it harder for me to buy into where they were headed.

In spite of those issues there were, of course, many things I really liked about the book. One of them being how Kade Boehme handled the part of the storyline involving Eddy’s coming out. Eddy is terrified – with good reason, given his past and the terrible things that have happened to him – of telling anyone he is gay. He is pleasantly surprised, however, when he tells his parole officer and doesn’t at all get the reaction he is expecting. This is something I feel Kade does an excellent job of in his writing. He always manages to give a positive, hopeful message along with the realism. Not everyone is going to react how you think, or fear, they will. Sometimes you have to give people a chance to NOT disappoint you.

I thought the plot twist involving Kyle and Eddy’s past was really great. Also, the epilogue was very sweet and was a lovely, feel-good ending to the book. And, I completely loved the curve ball (at least, I didn’t see it coming) that was thrown at us involving two characters who are very close to Eddy. That was one of my favorite elements in the story, in fact.

Overall, Going Under is still a pretty good read. But, what I’m really looking forward to seeing is something meatier again from Kade. Something I can really sink my teeth into, like Trouble and the Wallflower, Where the World Ends, or Gangster Country. No matter what, I always look forward to Kade’s work.

You can buy Going Under (Keep Swimming: Book Two) here: