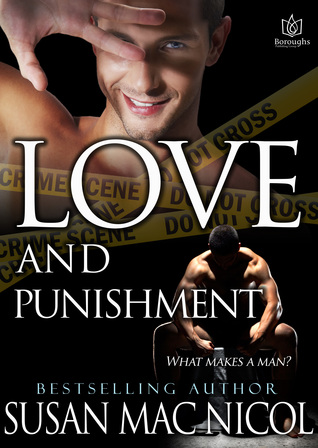 Blurb: FROM DARKNESS AND LIGHT

Review: Susan Mac Nicol has another winner in Love and Punishment. It’s a story about a hot alpha cop and his lover getting mixed up with a serial killer. What more could a girl want? The “Bow-Tie Killer”, so named by the press because he ties a bow around his victims’ necks, is killing a wide variety of people around London. There is no pattern to his victims and nothing that Detective Tony Parglietto can find to link them together. Tony has very clear-cut feelings about the individuals who commit this type of crime and he is not shy about sharing them privately or publicly. This brings him right into the BTK’s crosshairs.

The killer wants someone to tell his story, to get to know him so people will know he isn’t a monster, that he kills for a reason. He decides to use Flynn Parker, a newspaper reporter who also happens to be Tony’s lover. This only makes Tony more convinced that the BTK is a monster, and more determined than ever to hunt him down now that he has brought Flynn into the mix.

I’m not sure how I felt about Ms. Mac Nicol’s black and white distinctions at first, the way Tony sees things and people as good or bad, with nothing between the ends of the spectrum. His police partner doesn’t like it, and it winds up causing quite a bit of trouble for Tony at work. His version of black and white eventually seems to mix somewhere in the middle to form some shades of gray when it is someone he loves and a friend who are involved. The transition was a slow and gentle one, not a bat to the reader’s head and a moment of magical insight where Tony sees color for the first time!

Love and Punishment: It really took me a few days after finishing the book to get the title, if I even do. It doesn’t matter, it makes sense to me. Turns out that Flynn and Tony make a great team, both in bed and fighting the bad guy. I love their relationship, the warmth and genuine respect they have for each other. When Flynn betrays Tony’s trust, Tony is hurt but is able to forgive when he finds out why and really thinks it through.

It reads naturally, like a real couple would deal with a conflict. There was no packing and storming out for a month, there was no throwing of furniture or mother bashing, it was two mature men with differences of opinion dealing with those differences. It’s a great feeling as a reader to be treated with respect enough to not need the drama to tell the story. Not that the drama is a bad thing. I love lots and lots of drama. Ms. Mac Nicol just handled it a little more low-key than many.

I enjoyed this book. It kept me up late, and I wanted to lick Tony all over. Guess that’s as good a recommendation as any.

You can buy Love and Punishment here:

One thought on “Review: Love and Punishment by Susan Mac Nicol”