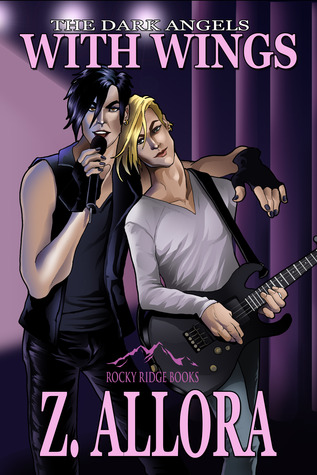 Title: With Wings (The Dark Angels: Book One)

Blurb: The lights go down and stage lights up. The Dark Angels have arrived. With his come-hither voice and body made for sin, lead singer Angel Luv draws lovers like a magnet. And when he caresses and taunts shy guitarist Darius Stone on stage, well…it’s an act, right? But every touch lights a fire, and every flirtatious glance chips away at Dare’s certainty that he’s straight. No one else has so captured his imagination.

Temptation beckons. It’s hard not to notice the want in Dare’s eyes, the way he stares when he thinks Angel’s not watching. One wrong move might scare him away, but a work trip to exotic Bali might be the perfect place to let Dare explore his sexuality, with none to be the wiser. But their “friends with benefits” pact has an expiration date, that just might sour their friendship.

Review: Lust is the drug and sex becomes the addiction in Z. Allora’s With Wings, a tale of rock n’ roll love in an exotic paradise.

Darius Stone is the guitar player who catches singer Angel Luv’s eye, and from the moment these two men make eye contact, the author dials up the heat of their attraction to each other. The only problem with the chemistry and spark that flows between them is that Dare is one seriously straight guy. Or at least that’s the line he keeps trying to sell—the gentleman doth protest too much, methinks—but in all fairness, Dare did believe he was straight until he met Angel, and that’s when he began to feel things he’d never felt before for any other man.

With Wings is not only some smoking hot etorica, but it’s also an exploration of labels, or, rather, our obsession with compartmentalizing sexuality into neat little categories when, in fact, it’s often far more complex than simply being gay, straight, or bisexual. Z. Allora brings Dare to the eventual realization that he doesn’t have to be anything but Angel-sexual, and does so in a romantic setting that, as the story unfolds, it quickly becomes obvious the author has some personal experience with. The Bali locale is the perfect place for Angel to seduce and for Dare to succumb, though it doesn’t happen as complication-free as the agreement to keep this a vacation-with-benefits arrangement dictates it should be.

There’s a lot of body language being spoken between Angel and Darius in this story but not much meaningful communication of the verbal sort going on, which provides for the tension and the conflict as the plot builds to its climactic arc, where misunderstandings are allowed to fester in the face of fear of rejection, and the deal that allowed Darius to explore his needs without exploring the whys of them becomes the wedge between the two men when they return from their nirvana, a dilemma you can see coming from miles away yet know it has to happen because it’s the only way they’ll ever have the chance to get things out in the open.

This book is filled with romantic gestures, the sort that scream actions speak louder than words, but reading between the lines is something Angel and Darius aren’t good at. The grandest gesture of all, however, comes at the end and provides for the perfectly romantic setup to the beginning of a committed relationship for these bandmates and lovers. It’s sensual and sentimental and begs the reader let go and simply believe there is a place of unconditional acceptance which embraces the idea that love is love.

There are several side characters for whom Z. Allora has offered hints that they’ll be getting their own stories as this series moves forward, which I’ll most definitely be watching for. If I had any one niggle, it would be that I felt one more proofreading would’ve made this a more fluid read—there were some instances where I had to read things more than once to make sense of them, which interrupted the flow of the story, but overall, I can say if you love your rock gods with a heaping side of sweet and sexy, With Wings is exactly that.

You can buy With Wings (The Dark Angels: Book One) here:

4 thoughts on “Review: With Wings (The Dark Angels: Book One) by Z. Allora”