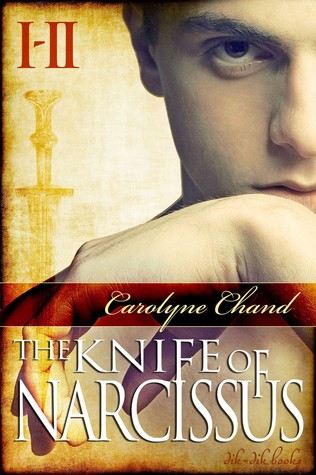 Title: The Knife of Narcissus (Parts One and Two)

Blurb: Lucius Sentius, along with most people in the city of Rome, assumes that the debauched days of Nero are behind them now that Rome has settled down under a sober new ruler, Vespasian. Lucius may be only the son of a merchant, but his newly arranged marriage to an older widow will bring powerful connections and an enviable life. If he keeps himself on a respectable path.

The upcoming marriage seems impossible when he discovers that his heart lies somewhere not at all respectable: his lifelong friend Trio, the reserved and serious son of one of the most reserved and pious families in the city.

As Lucius is pushed along the course of duty to family, to his promised spouse, and to Rome itself, he begins to see under the surface of his city, into a net of intrigues, manipulation, and corruption that can carry him upward in status and power…or destroy both him and the people he loves.

Review: Carolyne Chand’s Knife of Narcissus (1-2) is a refreshing departure from the kind of historical gay novels to which I normally gravitate. I’m a big fan of 19th century (early, mid, and late) and Edwardian gay fiction (not necessarily romances) and have read maybe one or two books set in ancient Rome a long time ago. And I must say, this is a wonderfully written historical gay romance, the first two books hitting the ground running as they introduce us to a world that’s both colorful and sensual in more ways than one.

Chand knows her Ancient Rome very well – I’ll not nitpick historical details, but suffice it say there’s enough information there as to not just the day-to-day comings and goings of Romans, but also nifty tidbits pertaining to food, entertainment, and even (and this is significant) attitudes and behaviors. Even what might initially look like a throwaway scene such as the one where two children are tussling in the street, little fists flying everywhere, and adult onlookers are actually placing bets on who wins…

Nice little details like those add so much color, texture, and layer to the environment in which Lucius and Trio grow up. They also remind us that we’re peeking into a world that’s wildly different from ours but at the same time, curiously similar in so many ways. And Chand performs a great balancing act in engaging our senses because she seasons her books with history without saturating it and overwhelming us. One of the dangers of writing historical fiction is the temptation to overdo descriptions and details, the urge to show off a writer’s research and knowledge of her/his chosen period so that the book turns into a plodding, boring history lesson rather than a novel that’s supposed to engage us from cover to cover. Knife of Narcissus shows us how things should be done.

Perhaps the best thing to me about books one and two is the fact that the angsting of the lovers over their unlawful feelings for each other is kept at a minimum. In fact, Chand limits the heartbreak and despair to Trio, who isn’t the POV character, so that we’re blessed with Lucius, who’s deeply in love but goes about dealing with his troubles in a very pragmatic manner. He doesn’t spend page after page bemoaning his fate, of being born at the wrong time, of being born gay. Oh, heck no. He slyly goes about learning how to be the perfect lover for Trio and is even very candid about it when confronted by his horrified/mortified/utterly-turned-on dreamboat. Whether by older slave, younger slave, or even a female contortionist – Lucius’ sexual maturation isn’t treated lightly, either. For every experience he enjoys, he gets something out of it, not just in the physical sense but in the mind and the heart as well. The female contortionist is nothing more than curiosity satisfied, and the clinical coldness of the moment – one that’s even slightly edged with wry humor – makes for a sharp contrast to the more sensual and more physically and emotionally gratifying man-on-man scenes. It’s an education that not only eases him into his nature, but also allows him to help Trio overcome his own fears and doubts.

Lucius might put up with a lot from Trio, but he’s no pushover, and it’s that determination – childish in many ways and edged with poignancy in others because of his too-natural fear of being alone – that makes this series a real treat to read.

That’s not to say that the side characters are ignored. Besides Trio, we’ve got a rich group of supporting characters whose personalities are vivid enough in varying degrees to add even greater nuance to Lucius’ relationships with them. Velleia, the widow whom Lucius is being forced to marry, is also a subtly written character. As I’ve only read two installments of the series so far, the jury’s still out as to her full characterization. However, from what I’ve read, it’s pretty easy to see that there’s a lot more to her than what Lucius allows himself (and, therefore, the reader) to see. Velleia drops a hint or two as to how she really feels about the match, and I suspect her to be just as reluctant – perhaps even embittered – by her prospects not just as a woman but as a wealthy one who’s also barren. She’s also well-educated and regarded as a bit of a curiosity because of it, and being treated no differently from chattel is nothing less than a hard, demeaning blow. That said, she’s not written as one of those dreaded danger-to-our-gay-lovers clichés. There are some hard words exchanged between her and Lucius, but it looks to me that she’s very much justified in her attitude, and I’ll find out once I move on to the next books in the series.

There are also Lucius’ father, Perseus (the older slave), Arpalycus (the young slave), Trio’s parents, among others – each one of them nicely fleshed out with distinctive personalities and quirks that add to the nice, tightly woven tapestry Chand has created for us. The first two installments of Knife of Narcissus are a fantastic introduction to a vividly rendered Rome of ages past. The writing is smart, nuanced, erotic, and affecting without the weight of melodrama bearing it down. There’s nothing overly sentimental and breathless about it, but the strained dignity with which the heroes (and some side characters) sort through their deeper conflicts makes their stories all the more compelling. A highly recommended read.

You can buy The Knife of Narcissus (Parts One and Two) here:

One thought on “Review: The Knife of Narcissus (Parts One and Two) by Carolyne Chand”