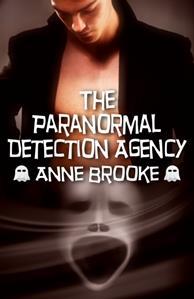 Blurb: When paranormal investigator Jack Atkinson meets new client Aaron Riley, he doesn’t expect the level of attraction he instantly feels for the man. Neither does he expect the kind of haunting Aaron describes, which Jack is determined to solve.

After their first official client meeting, the two men launch themselves into a passionate encounter, which Jack is keen to continue. Aaron’s attentions, however, are focused on the need to rid himself of the ghosts haunting his new home.

Jack and his trusty assistant and aunt, Miranda, investigate further, and soon discover how family secrets can run deeper than even Jack imagined. Will the truth destroy Jack and Aaron’s budding relationship, or are they strong enough to survive it?

Review: The Paranormal Detection Agency is a cute paranormal story about two men who are brought together by an old tragedy, a haunted house and a ghost!

John (Jack) Atkinson is the owner of the Paranormal Detection Agency, not detective agency as everyone likes to say, and is the running joke in the story. He has a gift: he can see ghosts, spirits and everything else that’s unseen to the human eye. He helps people with hauntings and helps ghosts move on to their next existence. John’s eccentric Aunt Miranda helps him out and is his assistant. He is content in his life but is a bit lonely and is looking for that special someone.

He meets a new client named Aaron Riley. Aaron needs help with a house that he’s inherited from his grandmother. He loves the house and when he started renovating it, strange things begin to happen. His construction workers are getting hurt and don’t want to come back. He needs help and turns to Jack’s agency. Aaron’s a skeptic and doesn’t believe that Jack will be successful, but Jack convinces him in many ways.

From the first moment that they lay eyes on each other there is this attraction. The story is told from John’s point of view, so we know exactly what his feelings are towards Aaron. I like this kind of narrative because I’m essentially in a character’s head. Here it worked for me, but I would have liked to have had a little bit more insight into Aaron, his background, and his emotional state, though it did not detract from my enjoyment of the story. Jack and Aaron made a cute couple and if this was a longer story, I’m sure their relationship would have been explored more. Yes, they burned up the sheets!!

Jack finds out why Aaron’s house is haunted and who’s behind it. I’m not going to tell, there will be no spoilers here, but I will say that the plot was thought out very well. It wasn’t something that was just thrown together. I would have liked more background, but that’s always the case where I get into a story—I want more.

John and Aaron have their happy ending. Their issues get resolved and they decide to give it a go. It’s a sweet love story with ghosts thrown in.

You can buy The Paranormal Detection Agency here: