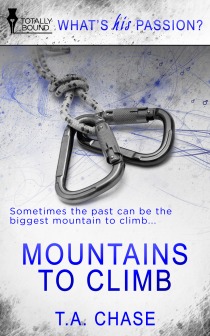 Blurb: Sometimes the past can be the biggest mountain to climb.

Toby Schwartzel has never forgot Jensen Brockhoff, the man he loved and the one who disappeared six years ago. He thinks he’s moved on, but when Jensen appears again and wants to explain what happened, Toby realises he never got over Jensen. He’d only built up walls to keep from being hurt again.

Jensen Brockhoff left New York City and Toby Schwartzel for several reasons. All of them had to do with drugs and alcohol. He’s clean now and the only thing he’s addicted to is mountain climbing. His passion for the sport has got him through the last six years. But after a particularly harrowing fall on Denali, Jensen knows he has to go back to tell Toby the truth.

Will Toby and Jensen discover they’d never moved past the love they had for each other all those years ago? Or are the mountains between them too high to climb?

Review: Mountains to Climb is the story of what happens after two men, Toby and Jensen, are separated for six years. The separation doesn’t seem to have dulled the feelings they felt for each other, even though their relationship was apparently a casual one. The reasons behind Jensen leaving Toby six years earlier, without a word, is a still-fresh wound for Toby.

When Jensen suddenly reappears after all that time, he initially offers no explanation for his disappearance. Toby has a ton of questions about it but for reasons unknown to the reader, he decides not to try to get answers to them. When the inevitable sexual reunion happens, it is apparent that, at a minimum, old feelings of lust are still alive and well.

Mountains to Climb refers to the long journey to overcome addictions to substances, as well as Jensen’s newer addiction to mountain climbing. He seems to have traded one dangerous addiction for another, in my mind.

Books that feature an addict or a recovering addict are a bit of a minefield for me. Some work, others do not. This depends a lot on the likeability of the addict, the ease with which the partner forgives the addict’s former behavior and the accuracy (in my opinion) with which the author portrays addiction and recovery. Mountains to Climb is a meh book for me, as far as that particular issue goes. This tells me that its meh-ness lies as much at the feet of the reader (me) as the author, T.A. Chase, and that other readers may have a far more enjoyable experience with it than I did.

I thought Toby and Jensen needed more development to avoid becoming caricatures, and definitely more time to establish newfound trust between them. I was left with more questions than answers regarding Jensen’s ability to enter into a stable relationship. As I read it, he still has a problem with addiction; it’s just been transferred to a more socially acceptable behavior. One that could kill him as easily as substance abuse.

This is one of those stories that would benefit from more: more character development, more back-story, more figuring out if the disparity between Toby and Jensen’s income has anything to do with anything, and definitely more length. If told in novel form, the author would have had the time and freedom to delve into everything much deeper. As told here, in a short form, I felt it was just okay.

You can buy Mountains to Climb here: