Welcome to the first edition of Dinner and a Book with Piper and Poppy! We have some treats in store for you including some comfort foods to go along with a comfort read. And as an added bonus, we convinced J.H. Knight to stop by and answer a few questions about her book The Last Thing He Needs while we’re cooking!

Take a look at the blurb for this thing and tell me you won’t need some great comfort food while reading it: 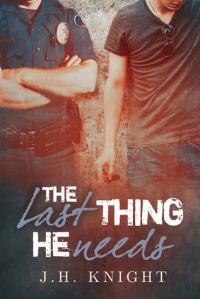 Tommy O’Shea is raising his seven younger brothers and sisters without any help from his drug abusing father and stepmother. Since he was fifteen years old, he’s managed to keep the children fed and out of foster care. It takes up every ounce of his energy and the last thing he needs is romance complicating his life further.

Rookie cop Bobby McAlister doesn’t belong in Tommy’s harsh world, but Tommy can’t push him out. As their unlikely friendship turns into a tentative relationship, they weather the daily storm of Tommy’s life with a lot of laughs and more than a few arguments.

Tommy isn’t used to trusting outsiders, and he’s never asked for help in his life. But when a tragedy strikes the O’Shea family and threatens everything he’s fought for, he’ll have to learn to do both to recover from the brutal hit.

Tommy’s doing his best to raise his younger brothers and sisters and all we wanted to do was fix them something that would stick to their ribs and keep those kids from being hungry! We hunted around and found a great recipe for Shepherd’s Pie. Can’t go wrong with meat and potatoes, now can you? And it even sneaks in a few veggies so maybe the young’uns won’t notice. 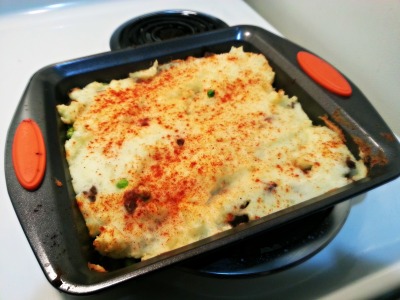 We whipped this together using Rachael Ray’s recipe, and yep, it only took about 30 minutes. Now, there aren’t any carrots hiding in there because certain people *coughs* Poppy *coughs* forgot to add them to the grocery list. 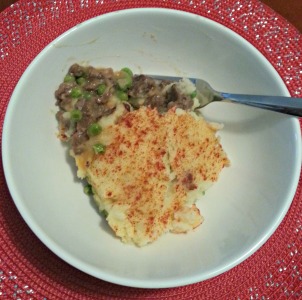 But it’s a great and filling recipe, and not very expensive, and was perfect to curl up and read Tommy trying to pull his head out of his nether regions and figure out how amazing Bobby was! Course, then we needed something sweet to finish it off because those boys are so sweet. And the babies! So Much Sweet.

For the dessert, we chose Hot Fudge Pudding Cake, adapted by the bloggers at A Family Feast from the original Hershey’s Kitchen recipe. This recipe was very simple and most families would probably have all of the ingredients on hand already. One big pan and you have enough to make sure everyone has a bowl, and since it’s warm and sweet and gooey, I’m sure the O’Shea kids would love it. 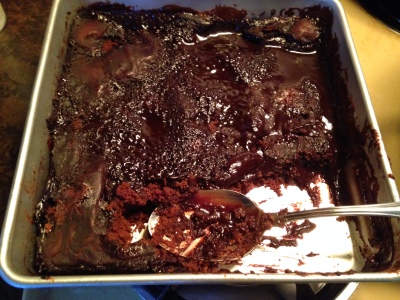 As the recipe suggested, we served it with a scoop of vanilla ice cream on the side, which was the perfect contrast to all the melty chocolate. Looking at this pic makes me want to bake up another batch, but I’ll refrain. ;) 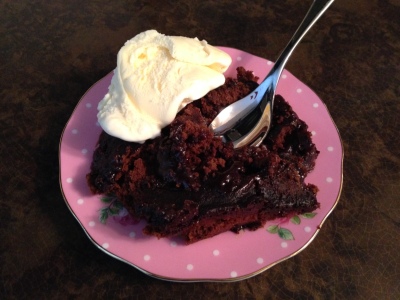 If you try either of these recipes, let us know what you think! And if you had to pick a recipe inspired by the book, what would suggest? For now, check out our interview with J.H. Knight and find out a bit more about the book, what she might cook if she had to feed the O’Sheas, and what her favorite comfort food is. :)

1. At its heart, The Last Thing He Needs is a story about family, both the one you’re born into and the one you build for yourself. Do you enjoy writing family-focused books? Do you come from a large family?

It’s never really a plan, but I often end up writing family-focused stories. Even when the story isn’t about the family itself, family (or friends who are as close as family) usually end up in the spotlight at some point.

I don’t come for a particularly large family. I’m the youngest of four children but a lot of my growing-up years were spent as an only child because my older brothers and sister had moved out by the time I was twelve. Family is deeply important to me, though. I have a very “we take care of our own” attitude—especially with my kids, my mother, and my sister.

2. Some authors use visual inspiration for their characters. Were Tommy and Bobby inspired by any real-life celebrities or public figures?

I wish they were! I think it would’ve been a lot easier to give my cover artist (AngstyG<3) something to go on. Instead I had to google things like “cute blond cop” and “hot guy with brown hair” to get close. Not that I minded the research.

3. Trust and learning to accept help from others are huge themes in this book. Do you trust easily, or are you like Tommy, needing someone to slowly chink away at your armor before you let them in?

On the surface I think most people would assume I’m like Tommy, very slow to trust, but that’s not really it. I trust too easily and have learned from experience to hold back until I’m certain of someone.

4. Bobby has a great deal of patience dealing with Tommy and his issues. What’s the one thing that makes you lose your patience quickly?

I had a really hot temper when I was younger, but over the years I’ve mellowed considerably. The one thing that still sets me off in a flash is seeing anyone mistreated. I cannot keep my cool in those situations.

5. For Tommy, it was a constant battle to keep his family of eight well-fed. What’s your favorite cheap, quick recipe for when you have to feed a lot of people?

Spaghetti springs to mind, but my favorite is probably taco soup. Toss a can of corn, a can of kidney beans, and a can of diced tomatoes into a pot (all the water from each, plus one more can of water) and add a pack of taco seasoning. Serve it with some corn chips and some cheese. It’s pretty filling and delicious.

Oh man, my list of comfort reads is endless. I was going to name a few, but I stopped myself around the twentieth book. I’ll just say comedies and mysteries are my “I need a blanket fort” reads. Nearly all of them are M/M titles.

Comfort food? I’m tempted to use my daughter’s answer: “I don’t have a comfort food. I have a comfort buffet.” But my real comfort food—and I have no idea why, because they’re not even close to being my favorite treat—is Pinwheels. The big chocolate covered marshmallow cookies. I only crave them if I’m sick or depressed.

Thank you for inviting me to drop by over here. I feel incredibly honored and had a lot of fun!

About J.H. Knight: J.H. Knight has been writing love stories since the second grade. When she’s not catering to the whims of her imaginary friends (whom she sometimes refers to as “characters”), she’s usually found driving her four children all over the planet, working on a school project, or saying things like “Not until your homework is done!”

A Pacific Northwest native, she loves the outdoors in every season whether she’s in the city, in the mountains, or building sloppy sandcastles with her kids on the beach. On her best days, she’s cuddled up with a good book, and on her worst days she’s tearing her hair out as she tries to decide if her sentence needs a comma or a semi-colon. She gratefully bows down in awe of editors, since she usually gets it wrong.

About Poppy Dennison:A sassy southern lady, Poppy Dennison developed an obsession with things that go bump in the night in her early years after a barn door flew off its hinges and nearly squashed her. Convinced it was a ghost trying to get her attention, she started looking for other strange and mysterious happenings around her. Not satisfied with what she found, Poppy has traveled to Greece, Malaysia and England to find inspiration for the burly bears and silver foxes that melt her butter. Her love of paranormal continues to flourish nearly thirty years later, and she writes steamy love stories about the very things that used to keep her up all night. If her childhood ghost is lucky, maybe one day she’ll give him his own happily ever after.

About Piper Vaughn: Piper Vaughn wrote her first love story at eleven and never looked back. Since then, she’s known that writing in some form was exactly what she wanted to do. A reader at the core, Piper loves nothing more than getting lost in a great book—fantasy, young adult, romance, she loves them all (and has a two thousand book library to prove it!). She grew up in Chicago, in an ethnically diverse neighborhood, and loves to put faces and characters of every ethnicity in her stories, so her fictional worlds are as colorful as the real one. Above all, she believes that everyone needs a little true love in their life…even if it’s only in a book.

16 thoughts on “Dinner and A Book With Piper and Poppy”