Jørgen has always suffered from panic attacks, but back when his first character came to me (like, ten years ago, would you believe it?) I was young and didn’t know much about mental illnesses. But last year, when he came back, I knew exactly what was wrong with him: Jørgen suffers from PTSD, or post-traumatic stress disorder. He has issues with touching, with crowds, with dark and enclosed spaces. He has issues with intimacy and a difficult time dealing with his family. He’s had a hard life and it’s not sugar-coated. Jørgen is damaged and it’s not going to be magically repaired.

Geir, on the other hand, has epilepsy. He’s always had it. He’s bullied at school for it, so he’s a loner. He has no friends. His classmates like to call him names or shove him around. This is bullying and it’s hurting him. He’s got issues because of it, issues that won’t magically go away because he finds love. As he has epilepsy, he’s also on medicine, and medicine has side-effects that Geir has to deal with in the novel.

Their story is a 100K long and it’s a slow-burn. Jørgen’s too damaged for anything and Geir just needs a friend. They’re discovering. Discovering that they can care for someone, can have friends, that they can have love and a relationship. Neither of them quite know how to go about it, what with all the issues in their way, but they’re young and they’re trying their best. They’re taking it slow. 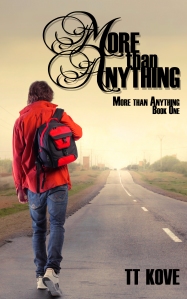 Blurb: More Than Anything

Arriving home after work one evening, Jørgen sees a young man who looks adrift and out of place—and who promptly has a seizure on the sidewalk. Jørgen takes care of him until the seizure passes and then, not knowing who to contact, takes care of him for the night. After giving the kid, Geir, a ride home the next morning, he expects that to be the end of it.

He doesn’t expect Geir to be a student at the vocational school where Jørgen works as an electrician. He definitely does not expect to be drawn to Geir time and again, to want things that will never be possible for two people with more obstacles between them than can ever be overcome.

Exclusive Excerpt: “I can’t really remember her.” Geir’s fingers brushed over her picture now. “Sometimes I think that the only reason I know what she looks like is because of the pictures Dad kept. I can’t remember anything concrete about her.”

Wouldn’t it be nice not to remember? To not have to relive my childhood at every possible turn. It would’ve been nice to forget it all. To be a normal, functioning human being. To be able to be touched without instinctively flinching away. To have a proper relationship with someone. What would that be like? To be with someone in all senses of the word. To love and to be loved. I had no idea. I’d never experienced love.

I startled out of my thoughts to find his eyes boring into me. “What?” It came out harsher than I’d meant it to, but he’d caught me off guard. For a moment I’d forgotten he was even there as I delved into my own thoughts. I stood up and backed off, back to the gravel road.

“You zoned out on me there.” He stood up as well and brushed his hands over his clothes. “You were staring at the stone with a faraway look, like you didn’t even see it. Are you okay?”

I nodded jerkily. “Y‐yeah. I’m fine.” I wasn’t. I never was. I was drowning. Drowning in my own misery.

A native of Norway, T.T. loves the country—in fiction. In real life, she wishes it could be warmer. T.T. works a regular job by day, and spends the rest of her time writing. Her iPad is her best friend, and it travels with her everywhere she goes, but at home the Mac rules the house.

If you have any comments, questions or other feedback, you can contact T. T. at ttkove@gmail.com. You can also visit T.T.’s website at www.ttkove.com and her blog at www.ttkove.com/theblog.

25 thoughts on “Guest Post and Giveaway: More Than Anything by T.T. Kove”