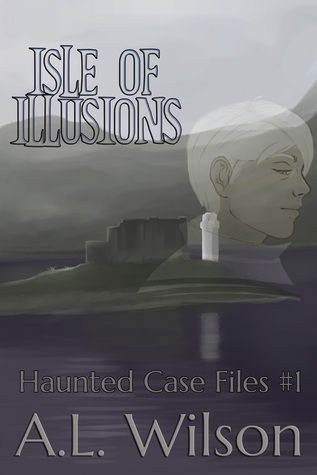 Blurb: The year is 1954 and this marks 10 rocky years that Cyrus has spent with his human companion, Dr. Lorenz Meissner. The two unlikely lovers, after some heated debate, decide to cross the Mediterranean and go on holiday in Italy.

At first it seems like a dream vacation for the paranormal investigators, but the tide turns as rumors of ghoulishly twisted animals washing ashore reaches Lorenz s ears. Cyrus is quick to dismiss the hearsay. However, something about the description of an animal with two heads has the doctor shaken.

Just when the two think they might get back to enjoying sandy beaches and quiet walks, something far more substantial than whispers of grotesque animals is swept in by the sea. The body of a human being washes ashore in a state that definitely suggests paranormal foul play.

Not only is the lovers vacation cut short, they are thrust into a ghostly case involving a sinister plot on an island cut off from civilization, which happens to sport a terrifying asylum.

Can our heroes escape the madness surrounding them or will they be trapped forever on the Isle of Illusions?

Review: Isle of Illusions by A.L. Wilson offers us a great twist to the investigator-lovers story. It’s also the first of a series called Haunted Case Files, the title of which pushes all the right buttons for me. That it’s a historical fantasy series only adds just the perfect amount of spice.

The story takes place post-WWII, and Dr. Lorenz Meissner is a mortal troubled by his past. Haunted by his experiences with Nazi doctors and their unnatural experiments, Lorenz takes to the bottle when memories and nightmares dog his steps. Cyrus, his vampire lover, takes good care of him and proves himself to be Lorenz’s rock. The book blurb pretty much lays out in clear terms the premise behind this installment of the new series.

When I dove into the story, I wondered if readers were expected to be familiar with the characters beforehand because of the way their back story is addressed. Instead of devoting a good deal of material on exposition, we get flashbacks and an occasional reference to past events.* On the whole, the way those flashbacks are handled is much appreciated because they don’t overwhelm with too much material all at one time. Those are nicely spread out through the book, breaking up the action a little here and there to provide us with some context as to the characters’ movements/inner workings and to ground us with some good, logical causality.

Lorenz and Cyrus are a sweet couple – very demonstrative in their love for each other, which might appeal to some readers, though at times they do get a little too sentimental. There’s a longish passage, for instance, describing them saying goodbye to each other before being momentarily separated for safe traveling, and it feels as though they’re blowing kisses at each other too long. In their relationship, Cyrus is the dominant one – not surprising as a trope in paranormal romances, as he’s the vampire, ergo, the more powerful of the two and the one with X number of years of (undead) life under his belt. He’s also quite short, the reversal in physicality when it comes to role dominance offering us a nice, rather cheeky twist.

The mystery has a lot of The Island of Doctor Moreau in it: animal experimentations, animal-human experimentations, human-vampire (or other paranormal creatures) experimentations. There’s a good deal of juicy potential being teased to us by clues, discoveries, and flashbacks galore; however, the novella doesn’t quite dive into things as deeply as I feel it needed to, given the mystery’s complexity. Considering the asylum’s setting – an island that’s purported to be haunted – the possibilities are there for a lot of development in terms of scene, atmosphere, and creepy side characters. But both setting and mystery are glossed over, the conflict barely grazing the surface of what could’ve been a really tension-filled climax and hair-raising dénouement. We don’t really get a clear picture of the motivations behind the experiments as well as anything more detailed beyond a quick exchange between the villain and Lorenz about their relationship in the past. Even the victims don’t get much “air time”, and we’re only given a hazy sketch of each – so much so that, once the smoke cleared, I didn’t really feel as emotionally invested in anyone.

One thing that stands out in this book is the way names are substituted with other nouns – almost like euphemisms but without the puritanical edge. For instance, Lorenz is referred to as “the tall male”, “the (tall) human”, “the blond(e)”, “the German”. And Cyrus is referred to as “the vampire”, “the short male”, “the dark-skinned vampire/male”. It makes for really cumbersome reading after a while, when simply mentioning the characters’ names, no matter how repetitive it might sound, would’ve sufficed.

There’s also some odd formatting of text that can throw a reader off. The novella’s got long paragraphs with dialogue mixed in. There’s no separation of back-and-forth exchanges between characters, and it does make for some confusing reading. It took me a little while to get used to things, and once I got the hang of it, everything flowed easily; however, the reader really shouldn’t be burdened with the mental task of separating dialogue. Rough edges like this and the ones previously noted can be dealt with, with some extra time spent revising and editing.

Despite the difficulties, I did find the story intriguing and different. A.L. Wilson does have a knack for some arresting, macabre images and a fresh take on gothic conventions, and it’ll be interesting to see how she develops this series down the line.

* After reading the novella, I went to the author’s website and saw that a full-length novel was published two months before Isle of Illusions. While the plot takes place in the present, the characters are the same, and their history together may be more deeply explored in that book. So I’m assuming that Isle of Illusions and the rest of the series are prequels to the novel.

You can buy Isle of Illusions here: