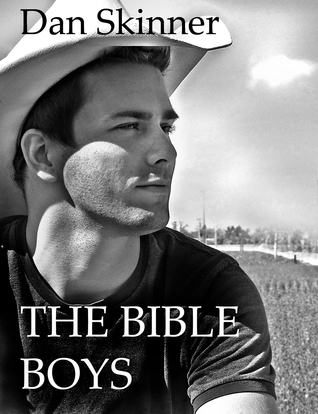 Blurb: A Sin. An Abomination. Teenagers Caleb and Matthew had been told by the radical fundamentalist church that dominated their families’ lives that a love like theirs—between two boys—was unnatural and forbidden. That it would damn them forever. The religion controlled their families like puppets, watched their every move, made keeping a secret almost impossible. They had only one chance to be together…and it would be a daring one right under the noses of the very people who would condemn them…

Review: It’s no secret how much I loved Dan Skinner’s amazing novel Memorizing You. It had a profound effect on me. Rarely has a book touched me so deeply, and I rec it often. I loved it so much that I’ve been extremely nervous about reading his newer releases. Strange, right? Don’t you normally rush out as fast as you can to buy the next book by one of your favorite authors? But I kept thinking, “What if it isn’t great? I don’t want anything to taint my love for Memorizing You.” Silly. I know. And now that I have read The Bible Boys – twice – I realize how unnecessary my worry was. Simply put, Dan Skinner’s words are beautiful.

Matt Moore has lived his entire life under the oppressive thumb of the cult-like, extremely right wing fundamentalist church to which his parents belong. He is an outcast. Shunned because of his beauty and confused by others’ dislike of him – specifically a couple of the pastors, and seemingly ALL of the other boys at the church – he leads a very sad, lonely life. Not even a life really, as Matt himself points out in the book, but instead just a bleak existence.

While at school, Matt sees the possibility of another life. A life with friends, and happiness, and where you can even go to church, yet it’s not a church that controls your ENTIRE world. Matt’s family’s church dictates everything, from how you are allowed to dress to who you are allowed to associate with, and even whether or not the rooms in your house can have doors on them! In case you’re wondering…they can’t.

Since he is not allowed to have friends outside of the church, Matt’s parents encourage him to join the boys’ youth group at church, The Bible Boys. However, the fact that all of the other boys treat him so terribly makes it miserable, and Matt avoids the events at all costs. Until Caleb Clare personally invites him to one of them – a campout at his family farm.

Unlike Matt, Caleb wasn’t born into the church. Caleb’s family has only recently joined; he and his father actually are just “following along” to make his mother happy. He doesn’t agree with the church’s radical beliefs and can obviously tell that Matt is unhappy in the church as well.

The only issue I have with the story is the ending. While it’s hard to complain about such gorgeous writing – the final chapters of the book have some of the most beautiful, thought-provoking imagery – I can’t help but want just a little bit more. Or, a lot more.

I will never again hesitate to read any of Dan Skinner’s books, and you shouldn’t either. Go enjoy The Bible Boys, folks. It’s fantastic.

You can buy The Bible Boys here: