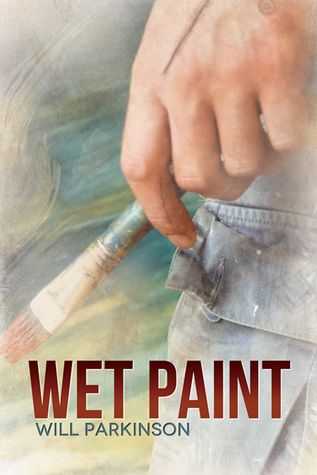 Although Addy’s heart and body bear the scars from his life before he was adopted by the Deans, he’s ached for something he thought he would never find. Until he met Benny. He isn’t sure how anyone can care for someone as broken as he is, even though he wants it desperately.

High school senior Benny Peters has his whole life planned out for him, until a chaste kiss at summer camp opens a new world of possibilities. Determined to erase Addy’s insecurities, Benny works to take away his boyfriend’s pain and replace it with love.

When Addy’s past intrudes on their future, it’s going to take everything Benny can muster to show that no matter what–or who–they face, they belong together.

A Wet Paint Ficlet by Will Parkinson

Jackson was scheduled to be released from the hospital tomorrow, and Taylor was overjoyed. He and Benny decided to go to Benny’s for a little decompression before the big day. They’d grabbed a shake from Babe’s, the ice cream shop that Benny favored, then off to Benny’s house.

Right now, though, Taylor was focusing on Benny. He had never seen Benny so happy before. It was hard to believe the impact Addy had on the young man who was always such a stickler for the rules that Taylor had to pull him out of his comfort zone more than once. This Benny? Completely different. He seemed…free. Like a weight was lifted from his shoulders. A slight twinge of jealousy shot through Taylor, knowing he wasn’t the one who had brought this new attitude about, but he quickly squelched it. The easy smile that Benny had was worth so much more to him than being selfish about the why.

“So you’re sure about this?”

Benny got a dreamy smile that Taylor had never seen before, then he schooled his expression. “Tell me about you and Jackson. How did you know he was the one for you?”

Taylor tugged a lock of hair and bit his lip.

“Shut up. It’s not an easy question.”

“Sure it is. When did you know he was the one you wanted to be-bop the rest of your life? It doesn’t get much simpler than that.”

Taylor flopped on Benny’s bed and stared up at the ceiling. He could still see where the glow-in-the-dark stickers of stars, moons, and planets in one of Benny’s phases – now long passed – had hung. Life was so much easier when they were kids.

“First off, be-bop? That’s disgusting, even for you. Second, when he walked into class, I wanted to know more about him. Losing out on the time because of what she did, and then almost losing Jackson because of Kevin? I knew I loved him the moment I walked away. The tears in his eyes broke me.”

Benny rubbed his neck as he took in Taylor’s words. “Yeah, I’m sure. It was that kiss, you know? When Sheila kissed me, it was all tongue and teeth. It was okay, but I didn’t feel anything for her. The kiss Addy gave me? No tongue. No teeth. Just his lips on mine. I know in romance novels they talk about fireworks when that certain someone kisses you. This wasn’t anything like that. This was the earth opening up and swallowing me. This was drowning in a fire lake, being burned alive and not caring. This was…this was my life being laid out in front of me. Showing me things I never thought I could have. For that one brief moment, everything made sense.”

“I had to stop him. I was his counselor and wouldn’t allow it. When I saw the sadness on his face, I wanted to do whatever it took so he’d never look that way again. Knowing that I caused it broke my heart. Still, I had to make sure it wasn’t because he was grateful to me or that it was a crush. I couldn’t let him get hurt.”

“What about you? Weren’t you afraid of getting hurt?”

Benny shook his head. “No. He couldn’t have hurt me anymore than he did.”

“What do you mean? How did Addy hurt you?”

“When he walked away, he took my heart.”

Taylor’s chest tightened. Benny was a clown. A consummate funny man. He wasn’t a romantic.

Yes, Taylor decided, I can’t wait to see how this plays out.

Author Bio: WILL PARKINSON believes that no matter what obstacles are thrown in the path of young love, it will always find a way to win in the end. He wants his characters to have their happily ever after, but that doesn’t mean that it’s going to come easily.

None of this would have happened if he had followed the advice he was given many years ago. “What are you wasting your time on that for? It’s never going to amount to anything.” He believed it for the longest time, abandoning characters he’d created in his childhood.

He picked up his very first m/m story by a writer named Eden Winters, who was an absolute joy when they corresponded. She asked him if he wrote and he told her the story. Eden explained to Will that the voices in his head would never go away and how he needed to let them out. With that thought in mind, Will put e-pen to e-paper once more. It was truly a liberating experience and one he has no intention of giving up again.

The Giveaway: A $25 Gift Card to Amazon or All Romance eBooks

12 thoughts on “Free Ficlet and Giveaway: Wet Paint by Will Parkinson”