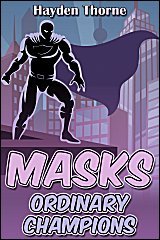 Blurb: Book 3 of the Masks series follows Eric’s adventures as a newly-transformed supervillain sidekick. Taking advantage of Eric’s relationship with Peter, the Devil’s Trill uses him for a shield against the superheroes. In the meantime, new villains and a new, covert vigilante-like group appear, with a young hero with chameleon powers attempting to infiltrate the Trill’s hideout and help Eric.

Eric struggles with his conscience and schemes to turn the tables on the Trill, but his powers deteriorate. He grows more and more unstable and unsafe while the Trill’s henchmen appear to grow stronger and stronger, as though they were also subjected to the same manipulation that’s been used on Eric. As the Trill fights both the heroes and tries to assert his dominance over the new villains, Eric realizes that he doesn’t have much time left to set things right on his own, even if it costs him his life.

Review: After the massive cliffhanger at the end of Masks: Evolution that left my poor heart in the hyper-palpitating throes of teenage anxiety (Eric and Peter’s, not mine), I’m so glad to report that Hayden Thorne didn’t leave me in such a state at the end of Ordinary Champions. But, let me tell you that doesn’t mean I’m any less anxious to make my way into the next installment of the series.

Ordinary Champions explores the continuing evolution of our dear Eric Plath, as he takes his place among the Devil’s Trill’s motley crew of misfits and mischief makers in this Gotham known as Vintage City, where the criminal activity keeps the city’s small band of superheroes working night and day to restore and maintain peace and order to its citizens.

Eric learns some difficult truths about himself in Ordinary Champions, and it’s his personal journey that’s the focus of the novel, made all the more encompassing as those lessons play out against the mayhem and action caused by not only the Devil’s Trill but a select few supervillians who’ve decided Vintage City is ripe for the taking as well; not to mention is made all the more endearing because, as in the previous books, this story is told in Eric’s sweet and snarky teenage voice. He’s learned a valuable lesson in being careful what you wish for in this episode of his ongoing adventures, and watching him struggle to do the right thing while knowing he’s expected to do the wrong thing was a lovely and emotionally gripping conflict. That, paired with his unresolved feelings for Peter, or, rather, his difficult-to-resolve feelings given the outcome of their last encounter, and their continuing to meet on opposite sides of the law, and Ordinary Champions offers the reader a perfectly balanced read.

One of the things that I love about this series as a whole is the portrayal of these teenagers as positive role models. Eric and Peter aren’t gay kids who happen to be heroes—ordinary, super, or otherwise. They’re great guys with extraordinary strengths and altogether too human weakness, who also happen to be gay. While in reality coming out doesn’t always go as well as it has for Eric and Peter, the fact that they are here, embraced and accepted by their families and friends, are struggling with school, love, and heartbreak, and, on top of it, have the chance to become the champions of their own story is a wonderful world to spend some time in, whether you’re an adult or a teen, gay or straight or anywhere else on the spectrum.

These books should be in every high school library, at the very least, and I can’t recommend the series highly enough.