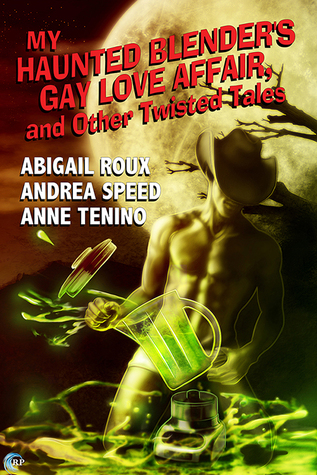 Blurb: A collection of not-so-chilling tales of love and laughter from three of the genre’s masters of pulp.

In The Bone Orchard by Abigail Roux – Pinkerton investigator Ezra Johns and US Marshal Ambrose Shaw have a lot to learn about life—and the afterlife—in their quest to bring a vicious murderer to justice. Fortunately, they’ve got all the time in the world to figure it out.

In City of Monsters by Andrea Speed – an ex-investigator turned some-kind-of-shifter (he doesn’t know, but with his luck, it’s probably nothing cool) is hired to find a missing reverse tooth fairy in the hellish dimension of Dev. But even simple things aren’t easy for a guy with more vices than virtues, and his situation gets even more complex when a hot newcomer to Dev with a taste for danger joins him on the case.

Review: Three wonderful authors bring us three delightfully different stories that deal with ghostly gun slinging marshals from the days of Wyatt Earp’s era, to an alternate world where monsters of every type rule the halls of Olympus where demigods play. Each has its own quirky humor and sweet love story to tell.

Overall, this is a strong anthology with little to criticize. Abigail Roux’s In the Bone Orchard is the most chilling of the three, where two men of the law battle an evil force across the millennium and fight to keep it in check after sadly realizing it will always be their lot to contend with it while they are still tethered to the earth. Theirs is a tender love wrapped up in a ghost story. While it may seem a sad tale, being chained to an endless fight with a man who murdered both of them and continues to spew his hate onto unsuspecting innocent people, there is also such comfort in knowing that Ezra and Ambrose stand watch on our behalf.

From this more somber tale we move to the rollicking good time that is Andrea Speed’s City of Monsters. I think this was by far my favorite of the three. Faced with a life in a world that has been created for a collection of every variety of nightmare character—from vampires to weres to zombies—our hero is a gambling, alcohol induced mess who quickly worms his way into your heart and who owns a haunted blender to boot. Barely keeping himself from being eaten or killed by the bookie who lends him his gambling dole, our unsuspecting hero is trying to make money by tracking down a reverse tooth fairy that has stumbled into a life of crime. Along the way, he becomes guardian to a new arrival who has a penchant for throwing himself into the fray without thinking. From the hilarious possessed blender who insists on making smoothies to the bumbling antics of our hero, this story was one belly laugh after another.

Finally, in her delightful tongue in cheek style, Anne Tenino offers up a dose of Greek demi-gods who are on the hunt for Zeus and his latest crime spree against humanity, in In Horny. From Achilles to Leander, with fauns and satyrs thrown in for good measure, this story was perhaps the most involved, plot wise. Ryan, a local bar owner, has had more than his share of bad experiences with men. Always seeming to need more than most are willing to offer, and refusing to engage in meaningless one-night stands, Ryan has held himself and his heart in check for many years. When his bar is visited by a group of enticing law enforcers from the halls of Olympus, he finds himself steadily drawn to one of the investigators, Leander. But Ryan refuses to fall under the sway of this erotically charged demi-god, and so the story revolves around the slow and steady wooing that eventually breaks down all Ryan’s reservations. This was a sweet love story that evolved at just the right pace, with wonderful moments of sarcastic wit juxtaposed with tender and loving emotion.

All in all, I found this collection of stories to be just top notch. Three of the most talented writers in the M/M genre today bring us three wildly different tales that are sure to keep you both sighing and giggling the entire time. My Haunted Blender’s Gay Love Affair, and Other Twisted Tales is a sure bet and a must buy for fans of these three gifted authors.

You can buy My Haunted Blender’s Gay Love Affair, and Other Twisted Tales here:

One thought on “Review: My Haunted Blender’s Gay Love Affair, and Other Twisted Tales Anthology”