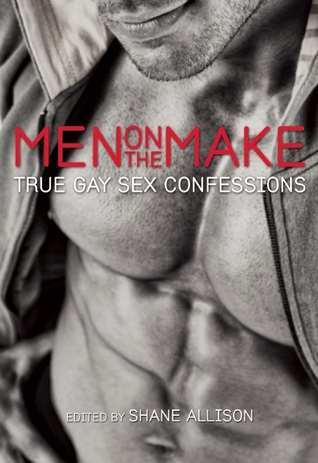 Blurb: Gay award-winning editor Shane Allison brings together a staggeringly sexy set of true stories reflecting gay life today. Men on the Make is as incredibly diverse as the culture itself, with true confessions that are revelatory, sometimes shocking, and always extremely personal. Allison’s book is a one-of-a-kind nonfiction compilation where gay men share peak experiences that are compelling and telling. As with the lauded editor’s fiction, Men on the Make features the absolute hottest, kinkiest, and most unexpected sex: sex in public, sex with a stranger, threesomes, foursomes, or moresomes.

Despite all these differences, one thing rings true throughout the book: the dirty, uncensored, underbelly of men when their hormones take over. As a man myself, I know the powerful draw of my dick guiding my judgment. That’s not to say that women don’t have baser needs which drive them as well…because I know y’all do. But from all the conversations I’ve had, the warring dominance and aggression of two men carries its own special brand of hedonism. That’s what this book is all about.

Since there is such a mix of stories, some will rock your boat and others won’t do it for you. That’s par for the course with an anthology, but one thing I can say after having read the book is that all of the scenes are gritty. There’s nothing romantic or clean about the recollection of these encounters.

Reader warning: there are some stories which describe body parts as rough. There’s some raw language in regards to race (although, this is done so in an autobiographical way by the authors when it occurs). Some of the sex is unsafe, and there are several instances of open-relationships. As I said before, there’s a lot of ass-eating that takes place, and many of these guys get off on sweaty and ripe. This is about sex in all its glory, so enter into this expecting a journey into the head of several gay men as they bare all their dirty glory.

You can buy Men on the Make: True Gay Sex Confessions here: