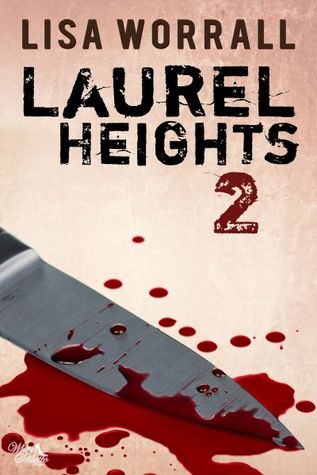 Blurb: Will and Scott are now out and proud and living together in Scott’s tiny house. So everything is perfect, right? Wrong…

Scott has a new partner, a new male partner, and Will is not happy about that at all.

A sadistic serial killer is at large, torturing his way through the gay community, but Will and Scott have no leads.

And one of the residents of Laurel Heights has been arrested for murder.

Review: I have given Lisa Worrall’s Laurel Heights 2 four-point-five stars instead of five for the simple reason that it just couldn’t live up to its superb predecessor. The only thing missing, through no fault of the author, was that excitement of discovering a new relationship. The hotness and emotions that are included in Book One just can’t be duplicated when writing about an established couple. With that exception, however, Laurel Heights 2 was simply great.

It’s a few months after Scott and Will closed the Laurel Heights case, and they are living and working together happily. Scott has healed from his wounds and is back on regular duty. The one thing that isn’t back to normal is that he has a new partner. A male partner. A gay male partner who seems to be interested in him and misses no opportunity to piss Will off. Ms. Worrall certainly keeps the snark and sarcasm intact, so much so that it is almost a secondary character. Her characters pick at each other the way I wish I could speak freely, but I’d get my ass kicked if I did!

The case they are currently working is a series of homicides of gay men that the press has adorably nicknamed “The Castrator.” That name should give the reader a little insight to the killer’s signature. As this series of homicides is happening, one of Scott and Will’s friends from Laurel Heights is arrested, another one dead. Of course, they are instructed to stay far away from the case. But seriously, if they were the kind of cops who listened to orders, would you want to read about them? No, they’d be boring.

The murder of one and arrest of another of their friends opens up painful memories from their time undercover in the Laurel Heights community. It was the first time they were paired together and where they fell in love, but it was also a terrible time when they discovered one of the men they had befriended was not who they thought he was. Their memories of that time are bittersweet, but that doesn’t stop them from wanting to help their friends now.

Kind of predictably, but that’s okay because I love these characters and would read about them doing almost anything, Will goes undercover in one of the bars where “The Castrator” has picked up some of his victims. The identity of the killer is a shock to him, the plan goes sideways and he loses coms with the team while being taken to a remote location and tortured. Just imagine if it were your lover in that situation. Now, imagine you had a badge and a gun. That’s how Scott reacted.

I simply love these characters. Julie, Will’s partner, is hilarious as the woman who carries her husband’s and Will’s balls around in her purse. She is going out on leave to have a baby any day now, but that has only added fluctuating hormones to her “charm.”

I would really enjoy a third book. I would happily read another somewhat predictable procedural because these characters were in it. I selfishly want to know if Julie has a boy or a girl, and to see Will become a godfather. I’d love to see where the new romance introduced in Laurel Heights 2 goes. Greedy, greedy reader, that’s me. Laurel Heights 2 is a just plain old good read. I read it in one sitting and wouldn’t have complained if it had been fifty pages longer. If you haven’t already, read Laurel Heights first, it is outstanding. Then read Laurel Heights 2. Though it isn’t necessary to read them in order, knowing how Scott and Will got together and the story of that case is helpful. Lisa Worrall is an auto-buy for me, and she should be for you too.

You can buy Laurel Heights 2 here:

31 thoughts on “Review and Giveaway: Laurel Heights 2 by Lisa Worrall”