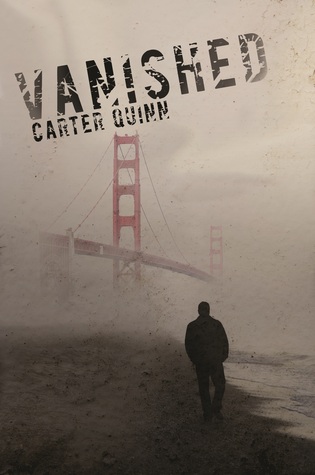 Blurb: Henry Cooley has good friends and a good life. He’s secure in his job and his relationship. He and Tom, the love of his life, are about to celebrate their twenty-first anniversary as a couple. Their son, CJ, is in his second year at Cal Arts. Henry’s only problems are his growing dissatisfaction with his job and the fact that Tom’s parents still hate him, even after all these years. At least those are his only problems until the morning he wakes up to discover Tom has vanished.

Review: I’m a huge fan of Carter Quinn’s writing and was really looking forward to read this story. The author himself said it was not a romance, it was something a little different. Well, I’m all for a little something different.

First, let me reiterate this is not your typical romance. To sum it up the only way I can imagine is that it’s a story of deep rooted love built over twenty-one years. When Henry realizes Tom is missing, you feel the intensity of his anguish. I give kudos to the author for writing words that put you in the character’s shoes, actually making you feel what the character is feeling. There is so much packed into this novella that the author makes every word count. It was a very emotional read.

There isn’t too much I can say without giving away the plot, but I will say this, I can read the darkest of the dark stories out there and be fine with it. They don’t affect me like they do other people. Maybe it’s because I don’t have any triggers and don’t usually associate myself with many characters. I feel for them, surely, but I can separate myself from the story. The closest exception to that habit is when a long established couple is threatened in some way. Vanished just hits home for me. I can totally identify with Henry, that kicked-in-the-gut feeling of maybe losing your significant other forever. You’re living a nightmare, and that’s exactly what Henry is going through while he’s searching and wondering where his husband could be.

When the truth comes to light and I finally realized where this story was headed, I was truly devastated. The strength of the characters, every clever twist and turn, the total mindf**k… I wasn’t ready for it to end. There have been only two other books that left me an emotional wreck for days afterwards, Vanished is the third. Was it worth it? Oh my god, yes!

Does this story have a HEA? Kinda sorta. Is Henry happy? Well, not right now. Will he move forward and deal? Only time will tell.

Overall, this is one book that I definitely recommend for all.

You can buy Vanished here: