As is usual with blog posts I get stuck about what to write. I want to post about things that readers want to know and so I asked my FB group what they wanted to know about my new release, Last Marine Standing

Jambrea Gaff asked how does the Heroes series tie into the Sanctuary series?

When I wrote Worlds Collide, book 7 in the Sanctuary series, I created a team of SEALs that backed up Joseph. One of those marines was a guy called Viktor, an explosives expert who literally fell out of the closet as Bi half way through Worlds Collide. I painted him as a guy who was all SEAL and who basically sought sex wherever he could. He was irreverent, a bit scary, but he was loyal. He helped the Sanctuary team, and his part in my books was done.

Except, suddenly he wasn’t. He niggled at me. He interested me. He demanded his own book. BUT, not a Sanctuary book. That arc was done, and as far as I was concerned at that time there were going to be no more Sanctuary books.

But… I did have an idea for a series of loosely linked books looking at heroes. Not just SEALS (book 1), or Marines (book 2), but cops, doctors, paramedics, teachers. And suddenly, I had a place for my hero to appear. The man who I created for the final Sanctuary book abruptly became a character in his own book.

I wanted to explain who he was and I needed to write him. I created an ex, a back story, and Heroes #1, A Reason To Stay, was born.

So although the Heroes series mentions Sanctuary in odd moments, it is not a Sanctuary book.

And as to Sanctuary and a possible book 8? … more news on that on the blog tour!

Former Marine Recon, Mackenzie ‘Mac’ Jackson has secrets. The things he did for his country, the things he saw, must never be spoken about. Until that is, his team is targeted.

A shift in political alliances means one particular mission undertaken by Mac and his Fire Team needs to be wiped from the history books. Starting with the team itself.

Forest Ranger, Samuel Larson wants to find the Marines who saved his life. He just wants to say thank you. What he can’t know is that he’s walking into a firestorm of betrayal and murder.

When Samuel arrives at Mac’s place he throws Mac’s plans for hiding out of the window. Abruptly Mac has to protect a man who threatens his heart, only this time he can’t be sure he will succeed in keeping Sam alive.

When the people you trusted turn on you, when you are the last one standing, should you take your secrets to the grave? Or make the murderers pay?

Excerpt: Sam continued, “She’s a clever one, going to be in government one day like Dad. I’m just an artist, and I’m a man, I need to do that stuff, don’t I?”

Mac hesitated. He seemed to be doing a lot of that. His normally quick reactions to situations were lost in the need to say exactly the right thing to Sam.

“You’re important as well,” he said. “And no one is just an artist. What do you like drawing?”

“People. And trees and things, nature, y’know?” Sam offered quickly. He looked shy and had the most intense sincerity in his eyes. When he grew up, when he was legal, he’d be a looker. He was all soft smiles and gorgeous dark green eyes, almost forest green and brown in this light, framed with long sooty lashes.

“How do you think they knew?” Sam half whispered. He was staring down at the parking lot again.

Mac wasn’t following the question. “Knew what?” He turned when the door opened. A nurse hovered on the threshold, but Mac held up a hand indicating five. She frowned and he smiled reassuringly. The last thing Sam needed now was someone fussing over his IV. Mac belatedly wondered if she had psychology experience and he should be asking her to stay, but she had held up three fingers, left, and shut the door after her.

“How did they know I was gay? No one knows. Not even Jo.”

Mac tensed. He suddenly realized where this was going. Sam thought his captors had abused him in the way they did because he was gay?

“It wouldn’t have mattered—”

“They hated me, and they hurt me. I don’t want that with any man I’m with.” Sam was broken, his voice harsh and his tears tracking down his cheeks.

Mac laid a hand on his shoulder and tugged him a little to pull him close. “It doesn’t have to hurt, kid.” 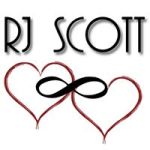 Author Bio: RJ Scott has been writing since age six, when she was made to stay in at lunchtime for an infraction involving cookies. She was told to write a story and two sides of paper about a trapped princess later, a lover of writing was born.

As an avid reader herself, she can be found reading anything from thrillers to sci-fi to horror. However, her first real true love will always be the world of romance where she takes cowboys, bodyguards, firemen and billionaires (to name a few) and writes dramatic and romantic stories of love and passion between these men.

With over sixty titles to her name and counting, she is the author of the award winning book, The Christmas Throwaway. She is also known for the Texas series charting the lives of Riley and Jack, and the Sanctuary series following the work of the Sanctuary Foundation and the people it protects.

Her goal is to write stories with a heart of romance, a troubled road to reach happiness, and most importantly, that hint of a happily ever after.