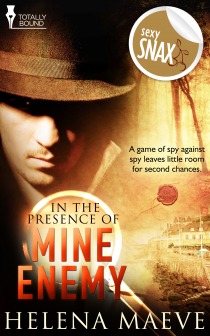 Title: In the Presence of Mine Enemy

Blurb: A game of spy against spy leaves little room for second chances.

Freshly retired from Section ranks, Hailey is glad to be out of the tangle of spy games that cost him both family and friends. All he wants is a quiet holiday on the French coast, his first in many years. He doesn’t expect to look up one day and find a former agent looking back—much less a man who should be rotting in prison.

Adam Asche gave Section the best years of his life, but when a mission went south, his associates callously deserted him behind enemy lines. Presumed dead, he has taken full advantage of his purported demise to resurrect his career as a hired gun. The opportunity to settle accounts with his former handler brings him to France and, soon enough, to Hailey’s bed.

But the longer Adam delays in fulfilling his mission and the more impatient his clients become. Leveraging desire against the time-sensitive nature of his contract quickly puts both Adam and Hailey in lethal peril.

Review: I’m not exactly sure what I was expecting when I began reading Helena Maeve’s In the Presence of Mine Enemy, but I can say, with all assurance now, that what I got is a novella filled with tension and passion and no small amount of danger, everything you could want in a story that pits a former spy against an assassin-for-hire; two men who share a very complicated past.

One of the first and, as far as I’m concerned, best of surprises in Enemy is that neither of the protagonists are twenty-something men. Hailey is retired from his service to Section, fifty-six years old, perhaps a little weary and leery of ever being able to fully relax in his retirement. His life has gone from international espionage to figuring out the clues to crossword puzzles, but relaxing into a normal life is not an easy feat to accomplish when you’re a man who knows too many secrets. And though I never saw Adam’s age specified, and while he is indeed younger than Hailey, there’s a sense that Adam has some years on him as well. Being of a certain age myself, I’m always glad to run across books whose protagonists have loved and lost and lived a little.

Ms. Maeve doesn’t hold back in introducing the tension to her plot early on, as Adam’s reappearance in Hailey’s life happens immediately, and Hailey’s reaction to Adam’s presence in his up-to-then quiet morning in a French cafe sets the tone of the story. Adam’s appearance can mean only one thing to the man who was once Adam’s handler, and the author handles the game of cat-and-mouse skillfully. Hailey’s acceptance of his fate, his acquiescence to Adam, knowing Adam’s reappearance can only mean Hailey’s demise provides for some rather poignant moments in the story and serve as clues themselves to where the story is headed.

While I’d have loved a few more clues myself as to Hailey and Adam’s history, there is just enough information provided to know that their initial parting was on far less than the best of terms. A flashback or two might have been a welcome addition, but it really wasn’t the point of the story. The point of Adam seeking Hailey out was about moving forward, not so much in reliving the past, and I enjoyed the way the author built this relationship around the conflict of their growing intimacy weighing against the job Adam has been hired to carry out.

You can buy In the Presence of Mine Enemy here:

One thought on “Review: In the Presence of Mine Enemy by Helena Maeve”