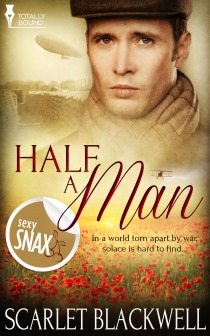 Title: Half a Man

Blurb: In a world torn apart by war, solace is hard to find…

It is 1919, less than a year after the end of the First World War and a recovering Britain is in the grip of the influenza pandemic. Times are hard. Victory came at a price for everyone left behind.

Crippled veteran of the Battle of the Somme, Robert Blake, is looking for someone to ease his nightmares of France. He carries never ending guilt over the fate of his commanding officer in the trenches. He turns to educated rent boy Jack Anderson for physical solace.

Jack didn’t go to war but faces struggles in his own way, selling his body to earn enough money to survive. The two are drawn inexorably together from the start, not expecting how deeply they will soon become immersed in each other’s lives.

Publisher’s Note: This book was previously released by another publisher. It has been revised and re-edited for release with Totally Bound Publishing.

Review: The premise of Scarlet Blackwell’s Half a Man is very promising, focusing on the developing relationship between a crippled veteran of the first World War and a prostitute. I eagerly dove in once I’d finished a previous review, looking forward to seeing where the story would take me.

Unfortunately not very far. By and large, this novella has lots of sex tied together by what I feel is a flimsy/thin plot with little conflict and a head-scratching deus ex machina rescue toward the end that’s supposed to ground home the dangers Jack faces as a gay prostitute. There’s a fade-to-black rape scene that’s also worth mentioning for those who don’t want non-consensual sex in their romance. That didn’t bother me as much as the fact that it – along with several scenes of dramatic conflict between the characters – felt shoehorned into the story.

There are a number of moments throughout the book where either Robert or Jack decides to keep their relationship strictly platonic or professional. And in each of those scenes, there’s a reversal; i.e., the characters change their minds after ignoring each other or avoiding each other for a short period of time. But there’s no real development in the way they decide that they’re meant for each other – other than great sex. They change their minds pretty quickly so that I don’t know why the momentary separation is even necessary in the first place. Yes, they’re playing a dangerous game by pursuing their relationship, but I didn’t really sense the significance or urgency of that as a source of ongoing tension. There’s also quite a heavy dependence on misunderstandings, which are largely brought on by one partner refraining from communicating his concerns with the other, in addition to the rape that seems to come out of left field, and the BDSM scene followed by a very lucky coincidence leading to a rescue.

The sex scenes are well-written and beautifully sensual. And that raises another problem I have with this novella; there’s such a disparity between the amount of attention placed on developing the sex scenes (which are pretty numerous) compared to everything else in between. When Robert and Jack make love, there’s a tenderness and an emotional connection there that’s quite touching, and I can see that these are two fully developed, complex men – but those qualities are glimpsed only during those sex scenes. The actual story itself feels rushed and glossed over, almost like an interlude as opposed to the main plot. And it’s that imbalance, this disjointedness making the story stumble along, that left me dissatisfied in the end.

It’s a quick read, and for those who enjoy lightly written historical romances with gorgeous sex scenes, this book might just fit the bill. For readers who prefer something more, though, I wouldn’t give this a hearty recommendation, even for its length.

You can pre-order Half a Man here: