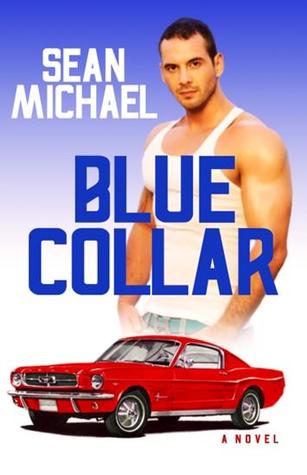 Blurb: Kendall Webber is deep in the closet. Between working as a mechanic in a garage, having served in the army during the era of Don’t Ask, Don’t Tell, and being raised by a fundamentalist-preacher stepfather who sent him to summer camps to make him straight, he’s learned to hide his sexuality from absolutely everyone.

Still, when a tall, dark, and handsome stud named Barton Willis III roars into the garage in his vintage Mustang, Kendall can’t help but look admiringly and longingly at the man, just a little. And when the flirtatious Barton not only looks back but eagerly invites him to explore his hidden desires, Kendall’s whole world is turned upside-down.

Now, the question remains…can Barton help Kendall let go of the past and the attitudes he’s had, literally, beaten into him?

Review: One thing that you can count on with a book by Sean Michael is sex, sex and more kinky sex. Blue Collar is no exception. For me personally, Mr. Michael’s books are either hit or miss. Mostly the sex is phenomenal, but the rest can be a little lacking. I enjoyed Blue Collar, it was very sexy with lots of kinky sex, but some of the dialogue was a bit over the top and took away from what could have been a great story.

The plot is pretty much standard. A closeted virgin submissive is paired with an alpha Dom. Kendall works as a mechanic in a garage. He’s gay but is in the closet, and maybe a little bit in denial. As a kid he was sent to a conversion therapy, or pray the gay away, camp, and this experience left him with a whole bunch of issues. In comes Barton. He brings his car into the garage. Barton sees Kendall and can’t wait to get him out of his clothes. Barton is a typical hot Dom, he gets what he wants, and he wants Kendall kneeling at his feet. As soon as Barton realizes that Kendall is a virgin, he goes into overdrive in his seduction. Right off the bat there’s crazy lust, but soon after both develop real feelings. Kendall is sweet and inexperienced and even though that combo pushes all of Barton’s buttons, he’s not a jerk and does take care of Kendall. I believed in their relationship and actions; it’s just that some of the dialogue was ridiculous and distracting. But for the most part, I did enjoy it. How is this possible? I put my own dialogue in. LOL. But that’s just my opinion and someone else will see it differently. The sex between the two is hot, and Mr. Michael’s knows how to write it to get the most of out it.

After they establish a relationship, Kendall’s coworkers find out that he’s gay and he has problems at work. Throughout his coming out, Barton supports and believes in him. Kendall’s past needs to be left behind and Barton is there with support and love. The ending was sweet and what you’d expect.

Blue Collar is a sweet and very sexy novella about being true to yourself and not letting the past control your future.

You can buy Blue Collar here: