TNA: Hi, Bey, welcome back to The Novel Approach, it’s great to have you here with us today. Let’s talk a little bit about Sacrificed. Have you modeled Captain Baltsaros after any one particular pirate, or is he more an amalgamation of the entire piratical lore? Or, would you say he’s entirely unique among pirates, real or fictional?

Bey: Well, he has Captain Kidd’s style, became pirate-by-mutiny like Capt. Jack Avery aka “The King of Pirates”, has the sadistic, bloodthirstiness of Francois l’Olonnais (pirate fun fact: he was rumoured to have eaten an enemy’s heart), and the ruthless iron-fist rule of Ching Shih (pirate fun fact: Ching Shih’s husband, Zengh Yi, was bisexual and adopted a young man to cover up the fact that they were lovers. Ching Shih eventually became lovers with the young man after her husband’s death, and he became her second-in-command).

However, Baltsaros is really his own man. He’s a gentleman pirate who hides his monstrous nature under a graceful, cultured mask. He’s got his own unique history and reasons for the way he is; and, also, because of the fantasy world setting, he’s got knowledge and skills that are entirely outside the realm of the Golden Age pirates of Earth.

TNA: Baltsaros has quite a savage side, even over and above what we think of pirates as a whole. Were you ever fearful as you were writing his character that you might push his character too far in the wrong direction? In other words, were you thinking at any point that readers might shy away from him, given his past proclivities, or were you fairly sure we’d be drawn to him even more because of them?

Bey: I was quite sure that some folks would be completely alienated by Baltsaros. After all, not everyone loves a fucking psychopath as much as I do. However, he is very much part of what makes the story what it is. I was hoping that though he’s a right bastard, some would forgive him for it because of what he does in the story.

TNA: How did you come up with the idea for the Emperor and his particular method of ruling and “religion”? Is he entirely fictional or is there a ruler somewhere in history whom he mirrors?

Bey: I wanted a wealthy ruler who was a sadistic fucker and (almost?) as intelligent as Baltsaros… but, I wanted him to be the really ugly side of the coin. Baltsaros may not actually give a shit about any of his crew/subjects, but he makes sure that they are free, equal, and unmolested because of a personal sense of duty.

Ah’puch, on the other hand, is the complete and total opposite. In fact, his disdain for human life disgusts even Baltsaros.

His method of ruling/religion actually grew organically out of the story itself.

TNA: This is a really broad question, but why do we love Tom? If you were to take a wild guess at what it is we, as readers, love so much about him, what would you say?

Because under his rough, hard-skinned exterior, there’s a broken boy that, despite all the abuse, still has a good heart?

TNA: Jon is really coming into his own in “Sacrificed” and seems to be finding his place between Baltsaros and Tom. He seems to be the balancing point for the three of them. Is that the case? Do you think he’s the glue that keeps them strong and together?

Bey: Before Jon came along, Baltsaros and Tom were doing fine. But… just that: fine. Jon was the catalyst for something much more profound. In bringing both men closer to himself, they become closer to the other. So yes… definitely the glue.

Being the glue for two very difficult men is more than challenging at times. Though, I think it would be fair to say that Jon finds the rewards… greatly stimulating. *grin*

TNA: When you’re writing the sex scenes between the three of them (or just two of them), how much of that is acting out your own fantasies? Do you ever picture yourself as one of the characters, all of the characters, at any given point? Which of the three men do you identify with most? Who would you most like to be alone with for a night, and why?

Bey: Oh… *laughs* some of it is experience. Some of it is fantasy. I won’t give you a percentage. *laughs*
And yes – I picture myself as all of the characters. Though not only while they fuck… all their actions.

I identify with all three… sometimes not equally, depending on my mood. *grins* Is that vague enough?

Who would I most like to be alone with? Oh, never just one… What really? You’re going to make me choose? If I have to choose… Well… of course I’m part of #TeamTom… You know, I did write him the way I did for a very good reason. *wink* 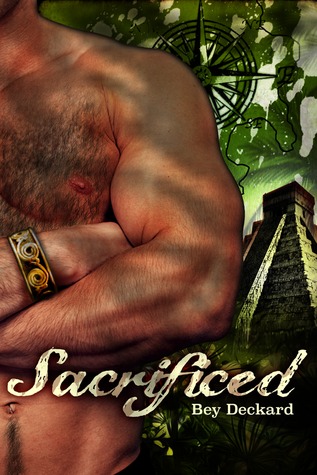 Reunited once more, the crew of Baal’s Heart must make the long and treacherous journey south to the towering spires of the Devil’s Isles. The path through the mountain range is fraught with peril; mayhem and tragedy plague the pirate ship, but what the men find beyond the spires is the most shocking of all.

The Giveaway: In honor of his visit, Bey Deckard is offering the chance for one lucky reader to win an e-copy of Caged: Love and Lust on the High Seas or Sacrificed: Heart Beyond the Spires, reader’s choice.

21 thoughts on “Interview and Giveaway: Sacrificed: Heart Beyond the Spires by Bey Deckard”