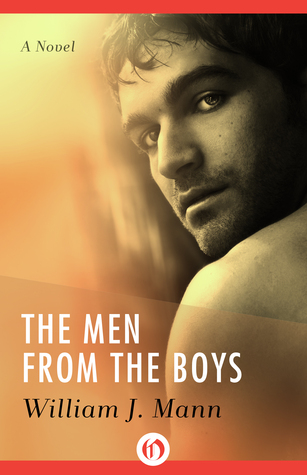 Blurb: This stunning slice of gay life at the turn of the millennium introduces thirtysomething Jeff O’Brien. After six years, his lover, Lloyd, has just announced that the passion between them has died. Terrified of ending up alone, Jeff turns his eye toward other men. But the anonymous, impersonal encounters leave him feeling sordid and used. In search of love during this “last summer in which I am to be young,” he finds romance with a beautiful houseboy named Eduardo. At twenty-two, Eduardo is the same age Jeff was when he began a relationship with the older David Javitz, a leading activist now gravely ill with AIDS. But David became more than a lover to Jeff, who wasn’t yet out of the closet. He was his mentor and cherished friend.

Narrated by Jeff, who’s caught between the baby boomers and generation X, the novel shuttles between summers in Provincetown and winters in Boston. The Men from the Boys is about the illusive nature of love and desire—“the magic that happens across a dance floor,” leaving you “forever young.”

Review: William J. Mann’s The Men From the Boys is a novel that is, at once, both surface and substance. Written in the mid-90s, the story is narrated by journalist and aspiring novelist Jeff O’Brien, a man who is aging out of the system, as it were. Jeff is thirty-something now; not young, not old by any definition of the word, but in a limbo, and Jeff is on a journey to discover what separates the men from the boys—which isn’t always evident as this novel unfolds. Men will be boys, as the saying goes.

Mann’s novel explores what it means to be gay in the midst of the AIDS pandemic; what it means when the bloom of youth is faded and no longer guarantees a pick up when Jeff goes out tricking; what it means to watch friends and ex-lovers die. On its surface this novel is about the pursuit of sex—one night stands, anonymous blow jobs at highway rest stops, open relationships and falling in and out of love from one encounter to the next. It’s in this aspect of the novel that one might assume Jeff is a narcissistic and rather monotone character, one-dimensional and lacking in any sort of depth. Unless one can look at Jeff and see oneself in Jeff’s feelings and behaviors, it may be difficult at times to relate to him in any sort of meaningful way. Fortunately, however, The Men From the Boys does have some substance to it as well, which ultimately is what saves it from becoming too near a caricature of itself.

The substance of this novel centers around the depth and breadth of relationships—strong friendships, the meaning of family, and what it means to love and be committed to someone but still seek sex from strangers and other lovers. The Men From the Boys isn’t a book about sexual infidelity but about emotional infidelity, about what happens when what was supposed to be one night with a stranger becomes complicated by feelings of want and need and affection. Jeff and his lover Lloyd have been together for six years and have opened up their relationship, by mutual agreement, which is all well and good until it’s not so uncomplicated anymore. Twenty-two year old Eduardo was supposed to be nothing more than a trick, but as he and Jeff spend more time together in Provincetown in the summer of 1994, life for Jeff and Lloyd begins to change in significant ways. Surrounded by a group of friends, many of whom are insignificant to the core plot, Jeff and Lloyd are two men who are attempting to navigate their way through growing up after thirty.

One character who is wholly significant to The Men From the Boys is David Javitz, Jeff and Lloyd’s dearest friend, Jeff’s mentor and ex-lover. Javitz is the older of the three men by more than a few years, and there’s a true sense that Javitz has seen and done it all. He is the man who is in a near constant cycle of teaching Jeff what it means to be gay, what it means to be a lover, what it means to be passionate, and, ultimately, what it means to be facing one’s own mortality. Javitz is in the process of dying of AIDS, the process meaning that his body is slowly succumbing to a number of health issues that are symptomatic of the disease. Having AIDS, however, doesn’t keep Javitz from having unprotected sex with random men in the dunes of Provincetown, and it was this plot element—whose responsibility is it to ensure condom use? Should a man who’s infected reveal that he’s infected?—that, above all other things, resonated with me and caused me to wonder at the relevance of the debate yet today.

The Men From the Boys is, by turns, superficial, poignant, and provocative, reading like a memoir or a man’s deepest sexual fantasies, perhaps both. It’s written in flashbacks, which I felt tended to lend a repetitious note to certain points and was a bit jarring, the feeling that I’d already read something before. There are times the characters challenge, times they’re disagreeable, times their actions seem pathetic, times the story is entirely sympathetic and touching. Jeff isn’t always a likeable narrator, there are times throughout when the characters feel little more than stereotypical, but these challenges are what make this book notable. Flaws make us human, archetypes are that because they all began as someone’s reality, and what ultimately separates the men from the boys? I’m not sure these men know the answer to that quite yet, but the question was well worth exploring in Mann’s novel.

You can buy The Men From the Boys here: