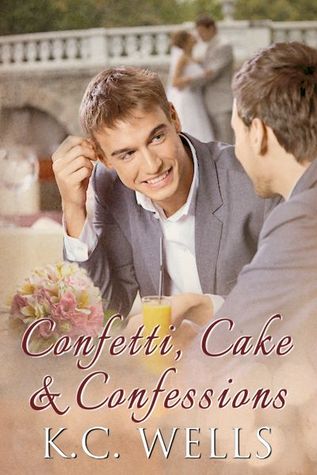 Blurb: Tony Porter and Marc Powell had lived in the same house for the past eight years, since their single parents moved in together. When Tony’s mother Marie and Marc’s father Dennis decide to tie the knot at last, it should be an occasion of great joy for everyone. Except all Marc can think about is having to spend the next two weeks with the young man he’s been in love with since he was sixteen.
Tony feels so torn about Marc coming home from college. He keeps telling himself that it’s wrong to feel this way about him. After all, in two weeks’ time they’ll be related. So when the two young men are thrown together to prepare for the wedding, tensions rise and discoveries are made.
It’s going to be a very long two weeks, and a wedding that no one will ever forget.

Review: Confetti, Cake & Confessions contains all the elements I love in a story: Two handsome protagonists, lots of angst, and gay sex. It’s the trifecta. In this story we meet Mark, who’s coming home from university in London to attend his father’s wedding to his longtime companion, Marie. Marie’s son Tony is the other protagonist, and is just finishing classes so he qualifies for university in the fall. Both Mark and Tony are keeping a secret…the same secret it turns out. They are madly in love with each other and afraid to admit it.

Told from alternating POVs, we delve into the inner workings of both men as they slowly deal with their feelings. Both young men are afraid to let the other person know how he feels, although for different reasons. Mark is afraid of what the family will think of them. Even though they’re not related, they are about to be step-brothers, and he’s worried they won’t be accepted as anything but disgusting. Tony is afraid Mark will hate him if he knows Tony carries such strong feelings for him.

What I enjoyed about this story was how the author dug deep into each character’s emotions. The set of secondary characters helped to flesh out the story, but we remain staunchly centered on Mark and Tony. Mark and Tony’s fears cause them to make certain decisions which would keep them apart. Watching as they struggle with their choices, then slowly work their way together, was a rewarding journey.

What prevented this from being a 5 star story for me was some of the convenient situations that propelled the story. For instance, they both shared an attic apartment room together in Mark’s father’s home. Also, once their relationship comes to a head, and then a stall, there’s a fairly extreme event that pushed the story forward. Whereas most of the story evolved slowly, showing character behavior through subtle actions, these devices felt a bit artificial, as if the author needed something to push the story along.

Overall, though, I thoroughly enjoyed the book and would recommend it to others.