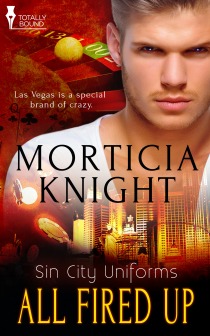 Title: All Fired Up (Sin City Uniforms: Book One)

Blurb: Officer Shawn Everly patrols the Strip and one night, fireman Trent Marshall saves him when danger strikes. But it’s still uncertain whether Trent can save himself from getting his heart broken by Shawn.

The party never ends on the Las Vegas strip but neither does the danger. Officer Everly is new to the beat, having recently relocated to Vegas from Los Angeles. Foot patrol on the Strip is a demanding assignment because he’s up close and personal with the public. But what he’d really like to do is get up close and personal with Station 32’s hunky fireman, Trent Marshall.

Trent has been a fireman for over ten years and is dedicated to his job. He’s built tough and is a no-nonsense man of few words. At a local blood drive, Trent meets the handsome new officer on foot patrol but won’t let himself get too close. He’s lost love before when his policeman lover was killed in the line of fire.

During an emergency, Trent’s over-protective instincts kick in when he believes Shawn is in harm’s way. He ends up embarrassing and angering Shawn in front of their fellow officers, which seems as though it will end any hope of Trent having a chance with the young man he can’t push from his mind. Shawn can’t decide whether he wants to punch or kiss Trent. Kissing wins. Once they spend some time together away from the stresses of their jobs, they find that they’re not just compatible—they’re combustible.

But Trent can’t seem to accept that there are hazards that come with working in law enforcement. Right as they’re discovering how much they mean to one another, the danger escalates on the Strip. The underground vigilante group, The Citizens Against Immorality, have raised the stakes. Will Shawn and Trent be their next targets?

Review: All Fired Up is the first story I’ve read by Morticia Knight. Set in Las Vegas (Sin City), we follow Shawn Everly (newly transferred from LA) and Trent Marshall (a firefighter in Station 32). Each man brings with him some baggage. Shawn has grown up spurned by his family. Trent has lost a lover who was killed in the line of duty. Both men are hesitant to jump into new relationships, yet their chemistry and attraction is immediate and powerful.

Their relationship starts off on rocky ground, Trent resistant to approach Shawn, and Shawn constantly putting himself in compromising positions where Trent has to save him. This earns Shawn a good deal of ribbing from his colleagues…but the two finally get together. Their relationship moves at a fast and furious pace, with ups and down, reaching a dramatic climax at the end to threaten all they’ve built together.

There were many things about this story which I really enjoyed. The heat index is truly scalding. The sex is frequent and detailed. Unlike some books where the characters heat up to a boil and then explode in a few paragraphs, these love scenes go on for pages. They’re creative, explicit, and sexy as hell. The emotional development of each character is sweet. Each has growing to do and they progress through their personal issues individually and together. And this author clearly did her research, the professional actions and decisions made by all characters true to life and accurate.

What prevented me from giving this a 5 star rating wasn’t anything the author did. It was something she didn’t do. For me, this book could probably have used another 20,000 words. At the point where a major hiccup threatens to rip Shawn and Trent apart, I would have liked to see their struggles fleshed out. It would have been more believable for me, not to mention upped the drama aspect, if they’d remained apart a bit longer so I could have lived their hurt and pain. It would have made their reunion all the sweeter. I also felt the story wrapped up a bit too abruptly. The major crisis came late in the book and resolved very quickly. The build-up of the tension and anxiety could have benefitted from more scenes, a deeper dive into each character’s head, and a more drawn out and gratifying conclusion. But that’s just me.

Overall, the writing was excellent, visual and descriptive, and the story line maintained a steady pace. A definite recommended read.

You can buy All Fired Up (Sin City Uniforms: Book One) here: