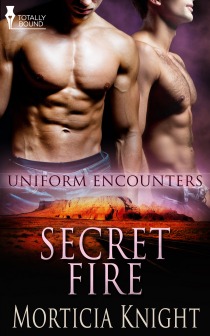 Blurb: Police officer, Zach and Fire Marshal, Daryl would be perfect together—if they would ever quit fighting long enough to find out. A devastating fire and the secret behind it almost keeps them from getting what they really need—each other.

Mesa police officer, Zach is a fun loving guy. Now that he’s hit the big three-oh, he’s looking to stop the hook-up train and find someone he can get serious about. When a mutual friend suggests Fire Marshal Daryl, Zach assumes he must be joking. The surly marshal has given cranky a new meaning. It’s unfortunate, since he is one fine-looking man.

Daryl has sworn off relationships ever since he caught his ex-partner cheating. He’s always taken everything in life seriously—from jobs to relationships—and is afraid he might be alone in that regard. Certain he can’t risk love again, he panics when he sees his secret crush, Zach, approaching him at a police versus firemen softball game. He’s nervous, as he is socially challenged with a tendency to blurt out the wrong things. It gets worse when he realises their shared buddy gave Zach a push. He assumes Zach is only talking to him out of pity.

Zach has been pissed at Daryl ever since they got into a verbal sparring match at the park. Yet, when Daryl comes to his aid during an explosive fire, Zach wonders what secrets might be hidden beneath the layers Daryl has built to protect himself from the world—and love. A night of passion turns into the possibility of something more as they struggle to find their way to one another. But all of that becomes threatened when there is a devastating fire that causes many people to lose their lives. As they work together to uncover the truth, someone thinks they’ve asked too many questions—and plans to stop them before they can ask any more.

Review: Secret Fire is a formulaic story about an outgoing cop being set up with a prickly fire marshal, in which we get the awkward first interaction, the misunderstandings, the hot sex and again, the miscommunication. While I usually like these types of stories, this one didn’t wow me.

Zack Lawrence is looking for love and to settle down. His friend suggests Fire Marshal Daryl Richards, a hot alpha whose last break up left him with major trust issues. Daryl acts like an asshole when Zack chats him up, but they have their first date and fall into bed soon after. Again, there’s misunderstanding between the two and to me, it was just too simple and clichéd. The sexual chemistry between the two was off the charts, but Daryl’s constant amateurish behavior often had me rolling my eyes. Daryl did take care of Zack and stay by his side when Zack really needed him, though.

I’ve read other books in this series, and I have to say I liked them more. It’s not that I didn’t enjoy Secret Fire, but it was mostly a read it and forget it sort of book for me. It was quick and enjoyable if not altogether memorable.