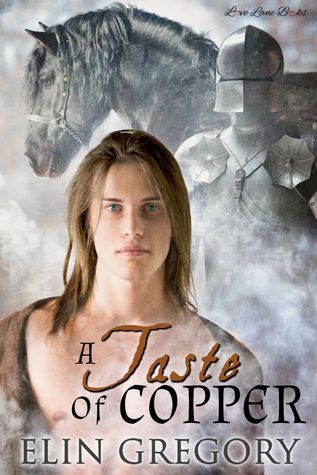 Title: A Taste of Copper

Blurb: Your master has the field for today, but his name, whatever it might be, is without honour.

Olivier the squire worships the Black Knight and takes a fierce joy in his prowess as he defends a bridge against all comers. Olivier only wishes that his master loved him as much in return instead of treating him as a servant and occasional plaything.

Then word comes that the King desires to cross the bridge. With an army approaching, a bright eyed archer enticing Olivier to desert and the first cracks beginning to show in the Black Knight’s gruff demeanour, Olivier is left wondering if his honour is worth more than a chance for happiness.

Review: A Taste of Copper is a well-written and engaging historical gay novella (Medieval) that offers us something different from the more passionate titles in this sub-genre. Not saying that Elin Gregory’s cheating us out of expressions of love and so on, but her approach is quite different from what historical gay fiction fans might be used to.

It’s Medieval, ergo, less refined than what we see in Regency romances and beyond. It’s got an edge of hypermasculinity, and it’s rough and dirty (literally, not sexually), but with just a touch of elegance. How Maheris and Olivier deal with their feelings for each other takes us plainly from A to B, not leading us through elaborate obstacle courses and even more elaborate subterfuge. Yes, because of the time period there’s quite a bit of suppression and denial, but that’s also tempered by more individual concerns. While predictable, those concerns still work and, in fact, perfectly fit the characters, Maheris in particular.

I do think it’s a bit of a stretch to call this a romance, per se, because the romance, surprisingly enough, takes a back seat to the confrontations at the bridge. The novella focuses more on the tradition, the question of honor, and the fascinating ritual of jousting, whether in play or otherwise. Yes, there’s some heartbreak in Olivier and, later on, in Maheris, and there’s temptation from Hywel. But those romantic complications are easily dealt with and eventually relegated to the sidelines in favor of confrontations between king and knight. If anything, the novella’s blurb is a little misleading because you’re made to believe that the crux of the plot lies in Olivier sorting through the temptation of leaving Maheris in favor of Hywel. But Hywel’s romantic/sexual role in the story is very, very brief and, in fact, happens only once. And how Olivier and Maheris come to terms with their feelings for each other also happens in one scene. The rest of the story, as I’ve noted, is everything else but the romance.

That said, it remains a really fun read. There’s also quite a bit of subtle, dry British humor that pops up here and there. The resolution to the question of treason is resolved a tad too conveniently, but the novella doesn’t pretend to be a long, angst-ridden, drawn-out exploration of the nature of honor and loyalty in the Middle Ages. It succeeds in its purpose, by and large, but I really can’t include romance as its main marketing point. As a glimpse into the world of knights and their foggy morals, it’s absolutely wonderful.

You can buy A Taste of Copper here: