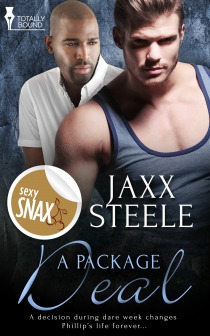 Blurb: One drunken night turned Phillip’s life upside down. Could James be the man to turn it right side up?

A drunken decision in college during dare week changes Phillip Drake’s life forever. In less than two years, he becomes a nurse, a father, then a widower. For a young gay man, this was way past tilt on his shock meter. To his disappointment, the life he’d planned for himself with his lover James will never happen. A tragedy brings Phil home with his son. He learns James wants to be with him again, but Phil is hesitant. His focus is on what’s best for his son. Could James be what’s best for both the father and son?

Publisher’s Note: This book was previously released at another publisher. It has been considerably expanded, revised and re-edited for release with Totally Bound Publishing.

Review: I have to admit I’m a Jaxx Steele fan. This author has a talent for writing novellas which develop rich characters, weave tight plot lines, and pack in some sexual and emotional heat. Not all readers enjoy reading shorter stories, but this author makes a shorter-lengthed novel feel longer.

In this story we meet Phillip Drake. In college he has a one night encounter with a woman (despite the fact he’s gay), which results in the birth of his son Tyrell. While this wasn’t the turn he envisioned for his life, his son brings him great joy, and Phillip accepts the responsibility of fatherhood without complaint or resentment.

When an unfortunate accident claims the life of Tyrell’s mother, Phillip is left picking up the pieces of his broken life. Travelling home to his mother and sister, he begins to rebuild a foundation for himself and his son. But two things stand in his way of moving forward: Tryell’s grandparents are fighting Phillip for custody of the child. While they’d shown no interest in any of their lives prior to their daughter’s death, their homophobia and greed (over inheritance money) threaten to break Phillip and Tyrell apart. The other thing that stands in the way of Phillips happiness is the resurfacing of his former lover, James, who never lost his feelings for Phillip. Of course, Phillip never lost his feelings for James either, but his life is so complicated, how could he possibly drag someone else into the mess?

What I loved about this story was the believability of the emotions. Phillip had real struggles. The way his in-laws tried to use his sexuality as a weapon against him in their battle for custody was painful to experience, yet he handled himself with dignity and pride. The heat between Phillip and James was steamy, and the cast of secondary characters were well-developed.

My only complain about the story is that, as a shorter-length book, there wasn’t enough time to go really deep. I would have enjoyed watching the relationship between Phillip and James develop more slowly, seeing the struggles before the reconciliation. I also would have enjoyed the torture of watching the custody battle drawn out a bit more. But, by nature, a shorter novel requires ends be tied up more quickly than in longer books.

You can buy A Package Deal here: