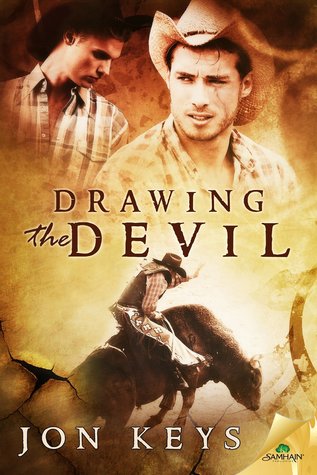 Blurb: A heart can live a lifetime in eight seconds.

Ever since his father caught him with another boy and threw him out at the tender age of sixteen, Dustin Lewis has been fighting his way up the national bull-riding rankings. He’s on the brink of qualifying for the National Finals when he draws Diablo, a notoriously rank bull—and the ride goes bad.

When bullfighter Shane Rees frees Dustin from the rigging of the same bull that nearly destroyed his face, he comes dangerously close to dropping his guard. Shane knows the potential consequences of being gay in a sport loaded with testosterone-overdosed cowboys, and the resulting scars of mind and body have left him with little self-worth.

Their near-death-by-bull first meeting sparks an attraction that awakens every last one of their personal demons. Yet as the National Finals draws closer, so do they. But they’ll have to overcome emotional highs, near-tragic lows, and bone-crushing danger before love can bust out of the chute.

Review: It’s been years since I’ve been to a real life rodeo, so Drawing the Devil brought back a lot of memories about the bullfighters who would draw the bulls away from the riders once the ride was over. As a child, thinking them clowns, I would laugh at their antics, never realizing just how dangerous their job really was.

Drawing the Devil starts off almost quite literally out of the gate, as Dustin is getting ready for the ride of his life on a bull named Diablo. Shane watches in dread, knowing what a nasty piece of meat Diablo can be. After all, he’s tangoed with Diablo before, as a bullfighter, and carries a scar across his face as a reminder that this particular bull is something that should be shot between the eyes.

What happened next totally grabbed me as I read on, holding my breath as I saw how Shane did his job to protect this rider once the bull had managed to bounced him off his back. And later on in the evening, as Shane is sitting in the back of a bar quietly having a drink, along comes Dustin, who introduces himself and offers to buy Shane his drinks for saving his ass. As the two get to talking, Shane finds himself liking this rather young, blunt bullrider. Getting ready to leave, Shane mentions where he’s heading in the morning, and Dustin asks if he can tag along, and he’ll even be willing to split the gas and motel room to save each other money.

Of course, neither one knows the other is gay…

And it’s at this point I’m really beginning to like these two. I loved how the relationship started to build their first night in the motel room, with them finding out about the other, even though Shane thinks of their time together as a one night stand. I loved how Dustin saw past Shane’s scars and saw nothing but a sexy man with a heart, and started to break down Shane’s barriers. Their banter, some of the things they came up with to say to each other, also had me smiling.

As the story progressed, I even enjoyed the secondary characters: Todd, Dustin’s childhood friend, and Sam, Shane’s fraternal twin. Both proved to be good friends when needed, when the stress of competition became too much. And what Shane did for Sam, I thought was rather sweet. Now that is being a brother. Although, after the attack on Shane I thought there might be a problem. Ouch!

And Mitch and Darrin? I’d love to find out more about them.

So, for a new to me author, I’m giving Jon Keys’ Drawing the Devil a 5 Star rating. It just hit all my romance buttons and is a keeper on my shelf.

You can buy Drawing the Devil here:

2 thoughts on “Review: Drawing the Devil by John Keys”