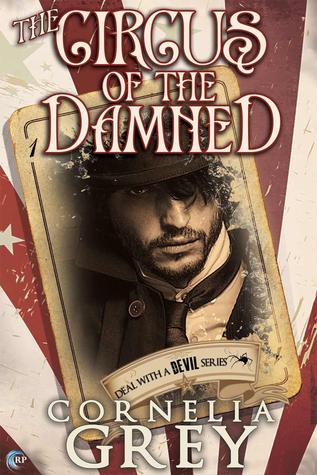 Title: The Circus of the Damned

Blurb: Magician Gilbert Blake has spent his entire life conning drunkards in the seediest pubs in the darkest towns, careful to hide the true depths of his power. But when he spends a little too much time in Shadowsea and the infamous slumlord Count Reuben gets wind of his abilities, hiding within the Circus of the Damned may be Gilbert’s only chance at survival.

But there’s more to the Circus than meets the eye. Every time a performer dies, a new one must take his place, or the entire circus suffers the consequences. And while the handsome ringmaster Jesse isn’t one to coerce unwilling performers into giving up their souls to the devil, a recent death in their ranks makes Gilbert exactly what they need.

Yet the longer Gilbert stays with the Circus, the more danger he seems to bring them. Being with Jesse is more than Gilbert could have hoped for, but as Count Reuben’s men continue to search for Gilbert and the Circus loses another performer, they all face running out of time long before the Devil claims his due.

Review: Cornelia Grey has put a new twist on the classic Faustian motif in The Circus of the Damned, book two in the Deal With the Devil series, which began with the novella Devil at the Crossroads, though each book in the series can be read as a standalone.

Ms. Grey proves quite deftly that avarice is a sin with far reaching repercussions in Circus, when she introduces Gilbert Blake, a grifter with the power to scam drunks and other dupes, a power he’s used to line his pockets with ill-gotten gain, but, as is the case with a man whose confidence and temper eventually get the best of him, Gilbert doesn’t see the flaw in his plans until it’s too late and he’s drawn the unwanted attention of a man who could make his life a living hell.

But therein lies the rub, as Gilbert, along with his most faithful companion Emelia (a wee brown mouse), seemingly trades one hell for another in his desperate attempt to escape an angry mob. He meets Jesse, the ringmaster of a carnival of freaks, and this is where the author sets out to breathe some new life into a timeless theme—this is the story of a man who, in a moment of greed and hubris, made a bargain with the devil and knows not what he’s wrought until it comes time to pay the devil his due. It’s also the story of a man who falls in love with the man whose soul has already been spoken for centuries before, and thereafter it becomes a battle for Gilbert to win that man’s heart.

With originality and skill, Cornelia Grey has introduced a troupe of outcasts, the ultimate unwanted who, on sight, might awe or repel in equal measure but who are written with charm and candor and are so engaging that they are endeared to us because they know what it means to finally be accepted into a family in spite of what they’ve sacrificed to belong, and have found a place in the circus where they can be revered in spite of their differences. It’s the compassion the author evokes for her characters that makes them the heroes of this imaginative tale, and placing Gilbert and Jesse in the center ring gives a romantic element to a book that I wouldn’t necessarily say is a genre romance but is an Alt U/Fantasy, with a soupçon of Steampunk woven in, and an element of longing that plucks at the heartstrings.

A prophecy spoken, a promise broken, and the danger this places upon everyone’s lives brings the action to its arc, and just when I feared a deus ex machina that would leave me disappointed, I found that even though it was what I was expecting, it was the ideal resolution to the story. There was only one thing that gave me pause in this otherwise delightful tale, that being I felt there needed to be a more fully delineated antagonist rather than just the mention and sketchy outline of one, which somewhat detracted from the sense of hopelessness and danger for me.

Farfarello, the devil himself, is offered a more in depth treatment in Circus than in Crossroads, as the author offers her own spin on the villainous archetype. Better the devil you know than the devil you don’t, as the old saying goes, and getting to know more about Farfarello left me feeling more than a little sympathy for him, something I’d never have expected going into this novel. Again, however, in making the devil a sympathetic character, I do feel Count Reuben being offered a more fully fleshed out treatment would have benefited the novel’s sinister arc.

At times whimsical and fantastical, at others heart-felt and suspenseful, overall I would say The Circus of the Damned is a damned fine way to spend a few hours reading.

You can buy The Circus of the Damned here:

One thought on “Review: The Circus of the Damned by Cornelia Grey”