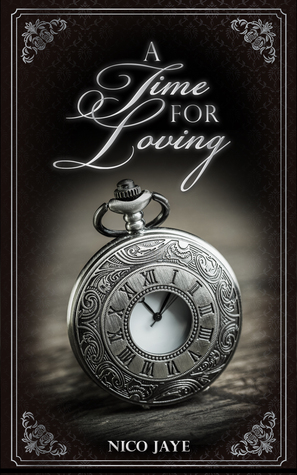 Title: A Time for Loving

Blurb: Jack and Christopher have made it through years of campaigning and the horrors of Waterloo together–side by side by day and, by night, in each other’s arms. After the war is over, however, will the love shared between this batman and his officer survive when Christopher returns to the life of a gentleman?

Review: Nico Jaye’s “A Time for Loving” is a short and very sweet little romance that made me wonder at possibilities had this been a longer story. The potential’s there, and the scenarios are plain lovely. On its own, it almost reads like a fairy tale, the conflict pretty much glossed over though certainly referred to constantly. There are several reminders, for instance, of how Jack and Christopher can only claim the late night hours for their own because of the illegal nature of their relationship. And that’s one little niggle I have; those reminders tend to be pretty insistent, and they’re further emphasized when the lovers are together. At times it feels as though I’m being nagged about gay relationships in the early nineteenth century, but it’s a small issue on the whole.

The story’s opening scenes are wonderful, and I can see the sly humor behind the forced partnering of two men in front of a crowd for a very practical purpose. It does help that it’s only the family who’s involved, but considering the stakes, given Christopher’s status, it’s still pretty risky. It’s a scene that nicely sets up what can easily be a great source of conflict and anxiety in Christopher and Jack, and I did hope to see that somehow explored further down the line.

The story ends in a surprise, however, which adds to its fairy tale-like quality. While the scenes leading up to it are pretty bittersweet but not necessarily heavy in the more dramatic elements, the conclusion works well in tying the story up neatly. It certainly would’ve helped to have known a little more about the people who’re involved in the story’s climax, considering the role they play in Christopher and Jack’s lives (and how much their own lives are shaped through the years), to perhaps help balance a stolen moment of lovemaking, which takes up a fair amount of the story. The story’s length does put a damper on things in this case, the final effect of which is the undermining of what could’ve been a more complicated plot, which is only hinted at and then left alone. As it stands, the second half of the book has a rushed quality to it, barely touching on potential problems arising from Christopher’s status and his obligations before blessing us with a nice twist, its back story also rather glossed over.

Nico Jaye also chooses a specific location for the conclusion of the story, one that’s mythical in its reputation as an idyll and one that’s also influential in the dawning of the Romantic Movement in English poetry. It’s a fitting retreat for a pair of lovers who’ve endured so much, only to be suppressed into silence and hiding by the laws of the country they love and serve.

If you’re in the mood for a quick, light read that’s high in romance and easy on the conflict, this story might just fit your needs.

You can buy A Time for Loving here: