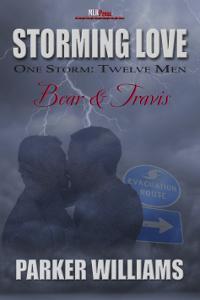 Blurb: Is it possible to fall in love from nothing more than a few phone calls and e-mails? Dr. David ‘Bear’ Berickza thinks so. Despite the distance and limited contact, Bear can only think about Travis Michaels, a fellow veterinarian in the small town of Timber Creek.

When he hears that Timber Creek is directly in the path of Hurricane Lauris, Bear makes a promise. He will be there to help Travis and his daughter, the smart-mouthed Tina, to save the abandoned animals.

The road to hell is paved with good intentions, and when Lauris hits, Bear and Travis find that despite their best efforts, it’s going to take more than that to save any lives, including their own.

Review: Travis Michaels is fighting a losing battle against nature. When all the residents of Timber Creek are evacuated, he and his daughter remain and become the sole rescuers of the town’s animal population as Hurricane Lauris is poised to pound the already ravaged town. However, all is not lost, for Travis has been communicating with Dr. David “Bear” Berickza who, upon hearing of the disaster, is determined to get to Timber Creek and help the veterinarian. Now the three of them battle the elements, attempting to save as many animals as possible, and themselves, but what neither Travis nor Bear reckoned for was the fact that their online friendship would morph quickly into a heated romance.

Parker Williams does romance incredibly well. He creates rich characters that you instantly fall in love with, and Dr. “Bear” is no exception. He is the strength that Travis needs to survive the hurricane, as well as the realization that once the area is habitable again, he will essentially be jobless. His was a small practice to begin with, and the loss of viable farmland and stock will effectively ruin the small town. But Bear does not hesitate to offer both his home and his heart to the man he fell in love with over the internet.

While Bear & Travis was shorter in length than some others in this series, it packed a huge emotional wallop in a short amount of time. The storm and its effects were written very well, instantly thrusting the reader into a tense and volatile atmosphere. The worry and exhaustion that plagued Travis was palpable, and the way in which Bear instantly took charge of his man was sweet and sensual.

Bear & Travis is a worthy addition to the Storming Love series. For those who love tender and easy romance, this one will be a keeper, for sure.