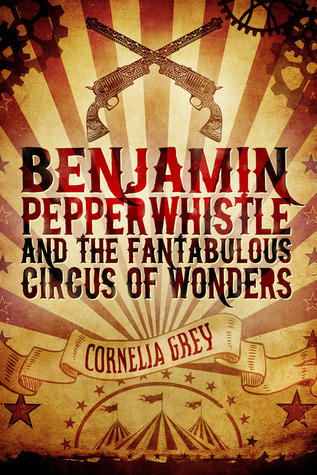 Title: Benjamin Pepperwhistle and the Fantabulous Circus of Wonders

Blurb: Benjamin Pepperwhistle has one overriding desire: to handle the glorious machinery that is a gun. So when he decides to run away to join the circus, it’s only natural that he should seek out the legendary pistoleer, Cole Beauchamp, and beg to be his assistant. Life in the circus has definite ups and downs, but as Benjamin settles in to his role, he finds that some perks are even better than he’d anticipated.

Review: Once in a while I’m in the mood to lose myself in a fetish story, and when I ran across Cornelia Grey’s Benjamin Pepperwhistle and the Fantabulous Circus of Wonders, I decided to try it out. The circus was what got my attention first, largely because I love circus settings – love the darkly fantastical associations we tend to have with it, the almost foggy, nebulous sense of time that skews our perceptions a little and adds to the dream-like quality of the setting. Benjamin’s last name, Pepperwhistle, neatly ties everything together insofar as initial impressions go. It’s very circus-y, isn’t it?

One of the best things about this novella is the fact that the story is a long, gradual build up of sexual tension between Cole and Benjamin – or more like in Benjamin, with Cole being a little slow on the uptake. Benjamin, though, makes for the perfect assistant and foil to Cole; he’s passionate, open, a touch on the naïve side (which adds to the sexual tension quite nicely), and reacts to his attraction to Cole, his gun fetish, and the reality of his role as an assistant with a mixture of terror, anxiety, and exhilaration. Cole is the partner who’s emotionally cut off, and the way Grey weaves the role of the gun and Cole’s act as a pistoleer in the circus effectively adds metaphorical elements to the story.

Outside the two men’s relationship, the circus and its staff are well-written. There’s enough detail to ground the reader firmly into the setting, and there are enough unique quirks among the performers and their animals to add to the dream-like atmosphere, setting them apart from similar characters in other circus stories. While not fully explored – and understandably so, considering the book’s focus – we still get to be treated to a nice backdrop consisting of a fringe community, outcasts, even, who form a tightly knit group of colorful family members who eventually embrace Benjamin.

This is one of those books that certainly gives you a lot for its length. It’s not a complicated story, but it never pretends to be one. If anything, it sticks to its purpose assiduously, develops its conflict without bloating it, and in the end, gives us a pretty satisfying and complete read in just 23,000 words.

You can buy Benjamin Pepperwhistle and the Fantabulous Circus of Wonders here: