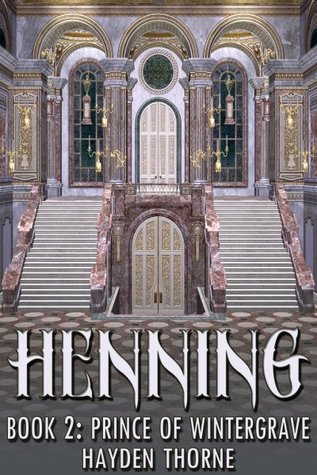 Blurb: Being a prince in a past life yields no benefits in the present, Henning has quickly learned. His concerned housemates have made themselves his official, overbearing chaperones, Ellery appears to despise him, and Henning’s limited movements slowly wear down his nerves. With his awakening process turning out to be more of a zombie-like stagger, the stakes rise inevitably as undead attacks not only increase in frequency, but also in danger levels.

Henning finds some relief in the company of Alan Scott — a handsome, smart young man he meets in a store, who displays an earnest interest in Henning. He gradually tears Henning’s heartbroken attention away from Ellery, offering him promises of happiness as can only be defined in a boy’s first love.

In the meantime, danger now spills over to threaten innocent civilians as they get dragged into monster attacks, making it difficult for Henning and his companions to fight back while raising troubling questions about the walls between worlds being torn down by dark magic. It also reveals the effect of a soul bond on Henning and Ellery’s awakening — that is, each boy’s awakening is affected by the other, and the mystery of how and why only get muddier.

As Henning and his companions scramble for answers, it’s a mad race against time when things happen that make them suspect Varian of crossing over to their world, searching for Henning.

There must’ve been something really special about that bowl of ice cream Joni served me last night because I woke up the next morning totally raring to go. In the worst sense. The first thing that crossed my mind when sleep fled was that I’d had a joint dream with Ellery, and it was reincarnated gay teen angst up the wazoo. The second thing that crossed my mind was, hurt or no hurt, I wasn’t going to sit around, sucking my dick (which I actually wish I could do), waiting for Ellery to get over his deal. I desperately wanted both of us to complete our awakening, work with Uncle Norbert and his gang, and do some major damage to undead threats from another world. And the only way to do that is to be out there and let our soul bond do the work by drawing us together psychically. Ellery wouldn’t like it, but hell. He wasn’t the only one who was suffering through this brain-melting process.

Henning’s old digs – sort of. I imagined the royal family’s palace to be something more along the lines of Versailles with less pretensions.

Besides, I was the prince. Princes always get their way, no? Modern world or no modern world, I was still the prince because, yep, crazy chaperones who wouldn’t let me have a normal life. I also kind of wanted to get this out of the way before school started as I didn’t want to screw up my grades.

I made my case known over breakfast with Cameron and Uncle Norbert. Joni had gone off to the market again before heading to work.

“Now that’s what I’m talking about,” Uncle Norbert said, grinning and looking at me, all proud. “There’s no need to drag our feet over this matter, Henning. Ellery’s got to understand just how serious this is. You’re thinking like an officer. I like that.”

I shrugged, blushing, while I cut up my pancakes. “It’s risky – I mean, I know I risk losing him completely even as just a friend once this is over. But Joni said if Varian manages to find his way into this world, all hell’s going to break loose, and people will get hurt.”

The Windsor uniform, a.k.a., how I imagined Henning’s court uniform as a prince of Malyrea.

Cameron just ate, listened, nodded, and tanked up on coffee. Uncle Norbert sat back in his chair and rubbed his hands together with a gleeful little cackle. Even his eyes twinkled deviously. I swear he became an overly happy Uncle Fester right at that moment. “All right. What’s the game plan, kiddo? Stalking and ambush? Sniper fire?”

“What – sniper fire?” I echoed, dropping my fork and knife. “I don’t want to kill Ellery!”

“Fine, we’ll make that our last resort if he continues to resist. And my idea of sniper fire involves something like tranquilizer darts – only larger and sharper. No one’s going to get killed, so relax.”

I just gaped at him.

He claimed his coffee and took a couple of sips. And when I say “sips” when it comes to Uncle Norbert, I mean huge gulps. His mug was empty by the time he was done, and I swore I saw it filled to the brim just a couple of seconds earlier.

“You really want to go out there and lay waste, don’t you?” I groused, finishing my pancakes.

And the princes married and lived happily-ever-after. :) Image was taken from Jeffrey Miles’ gay children’s fairy tale book, ‘The Princes and the Treasure’. In a perfect world, this could’ve been Henning and Varian. But alas, alack…)

“Oh, yeah,” he said, groaning and shaking his bald head. “It’s been a lifetime ago, Henning, since I went out there and slaughtered enemies. Guiding young, impressionable minds in an academic setting might be a noble effort, but I can only take so many grammatical errors and plagiarized material. You and Ellery going through your awakening is a godsend.”

I glanced at Cameron, and she just raised her brows at me.

“He was the greatest general of your parents’ army, you know,” she said, all matter-of-fact and stuff.

“Uncle, I don’t know what’s going to happen out there. I’m just going to step out, keep my senses on the alert, and go from there.”

He didn’t say a word for a moment. He just sat there, looking at me, his face puckered up like he’d just bit into a lemon. “That doesn’t sound much of a plan,” he said eventually.

“I’m not a soldier,” I grumbled, glaring at him. “I’m just pulling things out of my ass as we go.”

“No, you’re not a soldier. Even as a prince, you did rather badly in combat arts – barely passed those classes, come to think of it. It was either bad aim, or you didn’t hit hard enough. And you tried to argue with your tutors over philosophical gray areas in war and ended up boring your classmates to sleep. Is it any wonder you did what you did on the battlefield?” He snorted. “Emotions and impulse – maybe two of the worst side effects of a soul bond.”

More like the cause of a soul bond in my case, I thought grumpily. Still glaring at him, I said, “I was fifteen then.”

“Uh-huh. And you’re fifteen now. I’m dreading a close encounter with déjà vu on the battlefield in this world.”

I looked at him dully. “I’m keeping tabs of all the abuse I’m getting from you guys. When I’m an adult, you’d better watch out.”

Uncle Norbert just gave me a look and helped himself to another pancake. Cameron picked up her napkin, dipped part of it in her water, and leaned close to clean my chin with it.

“There you go,” she cooed, wrinkling her nose at me. “You’re so adorable, being all outraged and dripping with maple syrup.”

About Hayden Thorne: “If there’s a book that you want to read, but it hasn’t been written yet, then you must write it.” – Toni Morrison

I’ve lived most of my life in the San Francisco Bay Area though I wasn’t born there (or, indeed, the USA). I’m married with no kids and three cats, am a cycling nut (go Garmin!), and my day job involves artwork, great coworkers who specialize in all kinds of media, and the occasional strange customer requests involving papier mache fish with sparkly scales.

I’m a writer of young adult fiction, specializing in contemporary fantasy, historical fantasy, and historical genres. My books range from a superhero fantasy series to reworked folktales to Victorian ghost fiction. My themes are coming-of-age with very little focus on romance (most of the time) and more on individual growth with some adventure thrown in.

20 thoughts on “Excerpt and Giveaway: Henning Book 2: The Prince of Wintergrave by Hayden Thorne”