Blurb: Who knew that a summer thunderstorm and his lost little boy would conspire to change single dad Cayce D’Amico’s life in an instant? With Luke missing, Cayce ventures into the woods near their house to find his son, only to have lightning strike a tree near him, sending a branch down on his head. When he awakens the next day in the hospital, he discovers he has been blessed or cursed—he isn’t sure which—with psychic ability. Along with unfathomable glimpses into the lives of those around him, he’s getting visions of a missing teenage girl.

When a second girl disappears soon after the first, Cayce realizes his visions are leading him to their grisly fates. Cayce wants to help, but no one believes him. The police are suspicious. The press wants to exploit him. And the girls’ parents have mixed feelings about the young man with the “third eye.”

Cayce turns to local reporter Dave Newton and, while searching for clues to the string of disappearances and possible murders, a spark ignites between the two. Little do they know that nearby, another couple—dark and murderous—are plotting more crimes and wondering how to silence the man who knows too much about them. 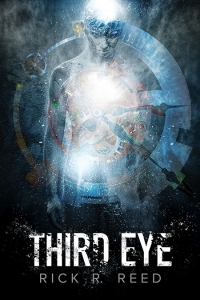 Excerpt: Cayce swallowed hard. For a long time, he stared out at the black water, its surface splashed with the silver of the moon. It would be so easy to just go back to the car. Wouldn’t it? He could return—guilt-wracked but ignorant—pick up Luke, take him to their own little home, put him to bed, drink some wine, and try to put this behind him. Yes… that would be so easy, Cayce thought. So simple. He turned back to Amy. “No.” He sucked in some air, exhaling slowly. “Give me a second.”

Cayce had never tried to make a vision come before. The visions themselves were unwanted, intruders to his psyche that he would have excised from his brain if given half a chance. Gladly. But he wanted to help, even if that meant ending this family’s suffering by replacing it with a new grief. At least there would be the comfort, if he could call it that, of knowing. He closed his eyes, breathing in the cool, damp air, and made himself go limp, opening himself up, in a way, to whatever his newly found vision might bring.

For a while—nothing. Just random thoughts, then a hope and a dread that this bizarre gift had departed as mysteriously as it had come.

And then a flash, a wash of red, dark, like blood, across the inside of his eyelids. “Near the water,” Cayce whispered. “She’s near the water.” He didn’t open his eyes, not wanting to see the pain on Amy Plant’s face and wanting to be more certain of where they might find… something. He saw himself walking closer to the pebbled, sandy shore, a place where the grassy surface of the field dropped off to meet a littered beach. In his mind, he made himself look up, peering across the dark water to the opposite shore, West Virginia.

And across the shore was a house, its yellow lights like a beacon in the darkness. The moon gave just enough light to supply details: a one-story ranch constructed of light brick. Run down. The drainpipe broken and falling off the side of the roof. There was a doghouse, and outside it, a mutt was chained. Dark, big, with pointed ears.A shepherd mix.

Cayce attuned his senses, and far off but still close enough, he heard the barking of a dog. Its bass woofs were barely audible and coming from somewhere downriver.

He took Amy Plant’s cold, callused hand in his own. “This way.” Cayce led her along the shoreline.

It wasn’t long before they came to what he had envisioned. The brick ranch was the only house occupying this part of the West Virginia shore. The barking of the dog had led them ever closer, almost as if the animal were a guide. Cayce stopped and looked at Amy then, her eyes bright with tears in the darkness. He didn’t need to say anything.

Before them, the grass had been trampled.

They trudged forward, on through the darkness and the damp, silent. Cayce stumbled and fell. He grunted as the fall knocked the wind out of him. “What the hell?” he groaned when he had found enough breath to put behind his words.

But he knew. He knew.

The two looked down to see a mound of fresh dirt. Some tin cans had been pulled over it, along with some drying weeds, but the dirt looked freshly dug. Nothing could hide that. All around them, weeds and various grasses grew unchecked. But there was this spot, a rough rectangle in shape, about as long as Cayce was tall. 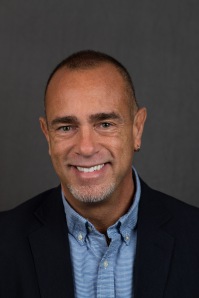 About the Author: Rick R. Reed is all about exploring the romantic entanglements of gay men in contemporary, realistic settings. While his stories often contain elements of suspense, mystery and the paranormal, his focus ultimately returns to the power of love. He is the author of dozens of published novels, novellas, and short stories. He is a three-time EPIC eBook Award winner (for Caregiver, Orientation and The Blue Moon Cafe). Raining Men and Caregiver have both won the Rainbow Award for gay fiction.  Lambda Literary Review has called him, “a writer that doesn’t disappoint.” Rick lives in Seattle with his husband and a very spoiled Boston terrier. He is forever “at work on another novel.”

THE GIVEAWAY: An E-copy of the thriller How I Met My Man