TNA: Hi, John, welcome back. It’s great to have you here with us today. Let’s start with a quick introduction, if you will, to tell readers a bit about yourself.

John: I was born a poor, blac…wait that isn’t me. Hold on. (Checks ID) Oh, I am the writer today. Got it. I am John Goode and I write annoying YA books for a living. Kind of. Well, not a living per se, but not a death either. I write stuff and hope people read it. Kinda. Well, most of the time I do, and then there are times I wish no one would read that cause wow, I really am not fond of what I wrote.

TNA: You have a new book just releasing today, Going the Distance, which is set in your Tales from Foster High universe and is the first in a new series. What makes Foster, Texas such a ripe setting for your characters and the stories you want to tell?

John: I think it is the dichotomy of it. We all think of Texas as this closed minded, Republican stronghold of guns, red meat and homophobes, when the truth cannot be farther from that. It is a rich state with a variety of people and at times, a pretty good cross section of what the entire country is going through.

TNA: Kyle and Brad shook up the status quo at Foster High. Now that they’re in college, is this the next generation to take up their fight, or will the Fadeaway series have a different focus?

John: Fadeaway is about Danny Monroe, the basketball player Brad met at A&M and his stuggle to be happy. As the story progresses he realizes he is going to have to choose, being openly gay or playing basketball, and the hard choice he has to make.

TNA: Tell us a bit about Danny Monroe. Do you think gay athletes have it particularly difficult in school, given the expectations and macho stereotypes that have been projected on athletics and male athletes? Where do you see that things may have changed and progressed since your own high school years?

John: Danny is a great kid and one of those rare guys you rarely meet. He is kind, compassionate, insanely talented and has no ego about it, which makes him even cooler. I think sports in general is a hard nut to crack for gay guys because of this preconceived notion that gay men are effeminate and so gay=sports makes no sense to most people. I know I like sports way more than my straight roommate ever has; it isn’t a binary solution. You can like men and be masculine. Hell, you can be a girl and love sports, so I think doing a story of this kind helps kids out there realize that just because they might not have stereotypical gay traits (which are crap, by the way), they are still healthy gay men.

TNA: If you could go back in time to your own high school days, would you? What are some things you’d change/do differently if you could?

John: Not fall in love with so many straight guys.

TNA: You’ve shared on social media that Logan Lerman and Chace Crawford are your Kyle and Brad. Who is your Danny Monroe? Does he have a love interest in the book? If so, who is he and who would play him if you were casting the Going the Distance movie?

John: Danny in my mind is Drew Van Acker with black hair and his love interest Sam looks a lot like Chord Overstreet. 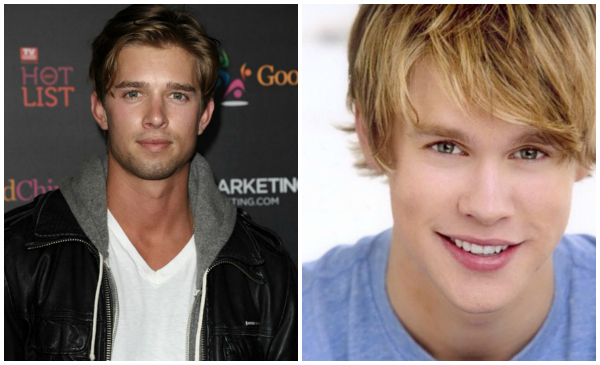 TNA: The focus of your writing most recently has been in Young Adult fiction. What is it about the YA genre that appeals to you, creatively speaking?

John: Because there is not the pressure to fill 300 pages with 100 pages of sex in it. I have had people read my young adult stuff leave reviews that say, “Great story but not enough sex in it, might not go on.” I mean, did anyone ask J.K. Rowling how big Harry’s wand was? There is this thinking that M/M has to mean sex, and I don’t think it has to. We are gay people and sometimes we want gay fiction, not always gay erotica. Not that there is anything wrong with erotica. Trust me, I love me some erotica. I just don’t think every story has to have a description of sex in it, and that pressure seems to be lessened in YA right now.

TNA: What’s the most memorable interaction you’ve ever had with one of your teenage readers? Is there any one fan letter that really stands out?

John: Oh god, all of them do really. Some kids have such a hard time out there, and they contact me and tell me that Kyle and Brad helped them, and I feel so happy for them. That two guys I made up can help these people I never met feel better about themselves is just about the best feeling I can have.

TNA: Would you care to share what you’re working on next? What WIPs are you working on that we have to look forward to?

TNA: Thanks for being here with us today, John. Will you tell us where we can find you on the internet?

Fadeaway: Book One
From the Tales from Foster High Universe

Looking like the perfect all-American boy—tall, handsome, and athletic—makes it easy for Danny Monroe to blend in with the in-crowd of a new high school. It’s a trick he picked up moving with his father from one Marine base to the next. When you aren’t going to be around long, it’s better to give people what they want. And what they want are his quick hands and fast feet on the basketball court.

On court, he can be himself and ignore certain strange developing urges. Everyone knows you can’t like boys and be a jock, but for Danny his growing attraction is becoming overwhelming. At the thought of losing the only thing that matters, Danny starts to panic and realizes he has a choice to make: happiness or basketball.

THE GIVEAWAY: THIS CONTEST IS CLOSED

11 thoughts on “Interview and Giveaway: Going the Distance by John Goode”