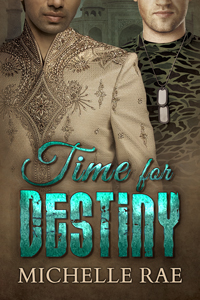 Blurb: When Daniel Wilson, oldest of five children in a troubled family, joined the military, he expected to see combat in Iraq. But it comes as quite a shock when a Rupee minted a century and a half ago transports him to that dangerous time in war-torn colonial India. After he meets and falls in love with Vir during his visit to 1857, he faces the greatest challenge of his life. He knows he may ultimately lose Vir because he belongs in a different time. Still, he wants desperately to keep his love alive despite threats of violence from both wars.

Review: Since he was old enough to work, Daniel has helped support his family. His father is the type that would rather collect welfare than help with the responsibility of raising his own children. And when their mother expectantly dies, their father blames Daniel for it. At the point that Daniel’s younger brother, Peter, is accepted at the university, their father, instead of encouraging his son, kicks both Peter and Daniel out of the house. It’s at this time that Daniel joins the Army to help support them, and is deployed to Iraq.

While in Iraq, Daniel finds a coin. Whenever he holds this coin, he has an irresistible urge to fall asleep, and in his dreams, he’s transported back in time to a violent war India is fighting with the British. The one constant, when Daniel does this time hopping, is that he keeps running into Vir, a young Indian who is caught up in the middle of all this conflict.

I’m a big fan of time travel romances, but I had problems with Time for Destiny, mainly because of the time hopping. While I liked the coin being the link to both times, it just didn’t seem that Daniel stayed in the past long enough to develop the relationship he had with Vir. I could see how they were attracted to each other, but the instant love? I’m one who likes more information about why two people are falling in love. Towards the end, when all was revealed and the two had their HEA, I became a bit confused as to what was happening and had to reread certain parts to make sure I wasn’t missing something.

So, with this in mind I’m giving Time for Destiny a 3 star rating. It was okay, but I felt the author needed to spend more time developing Daniel and Vir’s relationship.

You can buy Time for Destiny here: