“A cowboy’s heart has room for anything…”

There’s Speedball Malloy, whose entire foundation is rocked when Crispin Carrasco comes to the J-Bar Ranch in My Cowboy Heart. There’s Eddie Vasquez, whose long-hidden love pulls Jimmy Rafferty through some pretty hard times in My Heartache Cowboy, and now there’s Tripp, whose brother’s unexpected death in a car accident means leaving a career in the army in My Cowboy Homecoming.

For Tripp, coming home means returning to the life he was glad to have escaped, a mother who is emotionally unstable, and a father whose criminal past shames him.

The only thing worse would be falling for a guy like Lucho Reyes, a man who has every reason to distrust him.

This movie has some of my favorite actors and a plot that is familiar, but not hackneyed. As far as I’m concerned, they can make The Seven Samurai as many times as they feel like, in as many ways as they want to, and I’ll still love it. In Silverado, a rag tag group of has-beens and wannabes are horribly outmanned, outgunned, and out of time as they confront the forces of evil. (AND it has a very young, very ADHD Kevin Costner, swinging from the rafters.)

Do not forsake me oh, my darling…I love, love, love this film. From the clock on the wall as it ticks off the seconds to impending doom to the all-too-human and regrettably cowardly townspeople to Grace-by-God-Kelly! In High Noon a good man is caught between the peaceful life he wants to build with his new wife and his violent past as a lawman when one of the men he put in prison returns to exact revenge. The whole town turns it’s back… How can Gary Cooper survive???

A weary and sometimes entirely too shirtless and slickly sweaty, okay, even glossy gunman tries to leave his violent past behind, but wouldn’t you know it? A beautiful widow and her son are threatened and he needs to help them out before riding off into the sunset because…because…I DON’T KNOW WHY, goddamnit!

Here’s a little disclaimer. Half the time when I’m writing a book, I’m solving a fictional crime some other writer has committed in the name of literature. I’m righting–re-writing (as it were)–a fictional wrong. Why can’t Shane settle down with a lovely woman and child? Why must he leave with the sound of said child crying his name into the prairie winds…Shane!

He can, even if I have to make up my own characters, write a whole ‘nuther book, and add a new happily-ever-after ending for myself. And I’ll do it too, someday. Just wait and see!

This movie killed me. KILLED ME. I laughed, I cried. Wow! I remember it really knocked me out when I saw it. This film is Lord of the Rings with kids and cowboys instead of hobbitses and dwarves and elves, only Gandalf never comes back from the dead.

And I saw it around the same time I saw…

Bless The Beasts And The Children:

This film and The Cowboys, above, really date me, because they both deal with adolescent men and they’re from the same time frame—they were both releasedwhen I was an adolescent myself. They deal with misfits and social outcasts and the bond that grows between people with a common cause. They deal with doing something right for the right reasons, with being unselfish and brave, even if you’re scared sh*itless.

Both of those films really, really spoke to me when I saw them, and it’s no surprise, as they feature the kind of epic love and loyalty that I find tremendously romantic and also a little bit tragic…

Criminy. My little twelve-year-old heart simply burst inside my chest for these characters. I read the books and saw the films, and while I don’t know if they stand the test of time, the stories affected me profoundly.

I often think I should go back and watch these again to see if they still affect me the same way, but I’m almost afraid to do that. I’m not sure I want those experiences spoiled by time and distance and technology and maturity.

There’s something innocent about our fascination with cowboys. The old-school cowboy films made morality simple and very black and white. Yet to my mind, the best cowboy stories are the ones with a million shades of gray. They feature a simple man facing a complex problem–an ordinary man navigating the landscape of a changing world. His acceptance of compromise, his need to grow and change despite his discomfort is something we all experience at some point.

I believe that’s why our fascination with cowboys never wanes and why the American Cowboy story and it’s many “cousins of all cultures”, continue to keep our affection.

Check out my contribution to the cowboy club today: 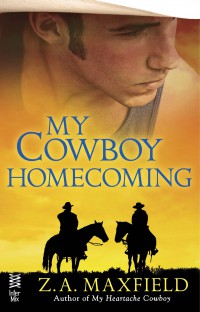 A sense of duty brings a soldier home…but a passionate cowboy makes him want to stay.

After his brother’s tragic death, Tripp has to leave the army and return to New Mexico to take care of his mother while his father is in prison for arson. Seeking work at the J-Bar Ranch, Tripp is immediately drawn to injured cowboy Lucho Reyes, whose foot was accidentally crushed by a rescue horse. But will the sins of the father interfere with the desires of the son? Tripp’s father may be responsible for the death of Lucho’s grandfather. Now Tripp must balance caring for his mother, repairing his father’s damages, and trying to win the heart of a man who has every reason to hate him and his family…

Excerpt – Chapter One: The road home was less auspicious than I thought it would be. Traffic slowed to a bare crawl outside Las Cruces, and the overheated bus had started to smell.

Just like on every bus, everywhere in the world, people were packed in tight. They stared ahead expressionlessly, as if that cramped, anonymous ride was the best they could expect because it probably was.

All four westbound lanes had been forced into one until at last we reached what seemed like a flare-lit city of fire trucks, police cars, and ambulances. Uniforms covered the highway like ants at a picnic.

When I saw the wreck, my heart gave a lurch. An old yellow school bus with “Iglesias Angelica Bautista” written on the side had been hit head-on by a double tractor-trailer truck. The impact had scattered debris all over both sides of the highway.

A single battered high-top sneaker lay in the middle of the street, blood-spattered and abandoned. I couldn’t take my eyes off it as we drove past.

The front of the wrecked school bus was crushed like an accordion. No way the driver survived the crash. There were others lying still and lifeless beneath sad yellow tarps. EMTs raced between people lying side by side in a makeshift triage area.

I tried to make myself do the deep breathing the army shrinks taught me. I thought about trying the other bullshit stopgap measures I was supposed to deploy before going to the little pills they gave me for anxiety, which I’d thrown away anyway. I tried repeating nonsense rhymes and visualizing my happy place, but the fact is, if you’ve been in a sniper’s crosshairs long enough, it’s hard to convince yourself there’s nobody trying to kill you anymore.

As we inched past the wreck, even I—with the knowledge of how random and tragic fate could be—shook with shock. I couldn’t take my eyes off that shoe lying by itself in the street because my brother used to wear those same Converse high-tops when he was about five. Chucks. I got annoyed every time I heard his little feet padding after me as I tried to run away and play with my “big kid” friends.

Wish I had that now.

Wish I had time to play with him and a chance to know him, now that we were both out from under our father’s thumb, but while I’d been deployed to the valley CNN once called the most dangerous place on earth, my brother got killed on the I-10, exactly like the poor bastard who was driving that bus.

The stifling heat made the Greyhound nearly unbearable. A woman on the seat behind me cried out to Jesus, starting a prayer that three or four of the other passengers echoed. Instinct, still honed to razor-sharp readiness, lifted me to my feet, even though the bus was moving.

“Sit down,” said the old man next to me, whose skin was gray with age and probably cigarettes. Tattoos littered his forearms, including one I recognized, the Devil Dog. Marines. “What do you think you’re going to do out there they aren’t already doing?”

I shrugged and sat.

He studied me. “Just get back?”

He just stared at me then, and something passed between us. Anxiety and fatigue and that indefinable pinch of pain, as if our lives were too small now, and it hurt to walk around in them.

I sat still, even though every cell in my body was telling me I should do something. It was both my nature and, up until recently, my job to keep order. Yet now my TOS was up, and I was going home.

In spite of everything, I stayed still.

It seemed like it took forever to pass the accident.

“Lordy, Lordy.” The woman behind me cried softly. “Sweet Jesus, help your children in their hour of need.”

I let my old, cold friend discipline flow through my heart and I looked away.

Maybe I’d built up this illusion that home was a place made of safety and order, but that goddamn shoe told me different.

Anyhow, that’s why I was late getting into Deming.

Author Bio: Z. A. Maxfield started writing in 2007 on a dare from her children and never looked back. Pathologically disorganized, and perennially optimistic, she writes as much as she can, reads as much as she dares, and enjoys her time with family and friends. Three things reverberate throughout all her stories: Unconditional love, redemption, and the belief that miracles happen when we least expect them.

If anyone asks her how a wife and mother of four can find time for a writing career, she’ll answer, “It’s amazing what you can accomplish if you give up housework.”

The Giveaway: A $25 Amazon Gift Card

3 thoughts on “Guest Post and Giveaway: My Cowboy Homecoming by Z.A. Maxfield”