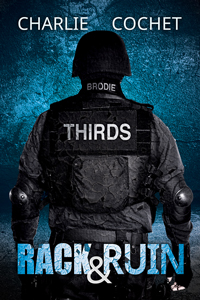 Blurb: New York City’s streets are more dangerous than ever with the leaderless Order of Adrasteia and the Ikelos Coalition, a newly immerged Therian group, at war. Innocent civilians are caught in the crossfire and although the THIRDS round up more and more members of the Order in the hopes of keeping the volatile group from reorganizing, the members of the Coalition continue to escape and wreak havoc in the name of vigilante justice.

Worse yet, someone inside the THIRDS has been feeding the Coalition information. It’s up to Destructive Delta to draw out the mole and put an end to the war before anyone else gets hurt. But to get the job done, the team will have to work through the aftereffects of the Therian Youth Center bombing. A skirmish with Coalition members leads Agent Dexter J. Daley to a shocking discovery and suddenly it becomes clear that the random violence isn’t so random. There’s more going on than Dex and Sloane originally believed, and their fiery partnership is put to the test. As the case takes an explosive turn, Dex and Sloane are in danger of losing more than their relationship.

Review: So I’ll start this out with.. This is the third book in the THIRDS series, and they really do have to be read in order.

Now, onto the fun part… And excuse me if I become a raving fangirl, but I absolutely love this series and its author. She’s a wickedly talented writer who, in a very short time, has created a wickedly addictive series.

This book was AMAZING in so many ways. Particularly, the little intricacies woven into the storyline that weren’t visible until my second read-through of the book. Yes, I’ve already read Rack & Ruin twice. There was a tremendous amount of story packed into this book, so it’s really one to pay attention to as you’re reading along.

The first book in the series sucked you in with the development of the characters and the action. The second book kept the story moving forward and added in more backstory and developed stronger emotional ties between the whole team, and with Dex and Sloane. Rack & Ruin has the action still, but this book for me was about the intimacies of the emotions between Dex and Sloane, and also the ties among Destructive Delta.

All the more, the relationship based scenes between Dex and Sloane are what stand out for me. Throughout the story there are these small, intimate moments, like when Dex found a small jaguar stuffed toy with bandages on its paws. While he’s sitting on the side of the bed, tears rolling down his cheeks, Sloane walks in, and the first thing he does is tenderly wipe the tears away with his thumb. The conversations that they had about Sloane’s past, Sloane asking Dex to stay with him when he calls the doctor from the Center, and so many other moments; I can’t say enough about how very much these vignettes impacted me throughout the story.

I will totally admit that I’ve been a hardcore Dex fangirl since the first book. Now, though, Rack & Ruin firmly placed Dex and Sloane into my top 5 favorite m/m couples, and my top 10 favorite overall characters. In this story we see more of the solid, strong Dex over the sweet and silly Dex. We also see Sloane showing more of the boyfriend type traits, which is a pretty adorable thing to see from him. Oh, and just in case if you were curious, there are still seriously flaming HOT sexy times with Dex and Sloane woven into the story. The first one that will make you laugh is at Ash’s apartment, in HIS bathroom.

We do see the other characters in the book, including more of Bradley, Lou, Sebastian Hobbs, and two other team leaders, Levi and Taylor. The other big ‘relationship’ storyline that’s picking up steam is Cael and Ash. Unfortunately, it’s not in a good way. We learn quite a bit about Ash’s backstory, and it’s enough to break your heart. Then we see the interaction with Ash and Cael, and you’ll either want to rip dangly bits off Ash or cuddle him for his behavior, especially after his backstory is revealed. I still wanted to rip dangly bits off, though, even after that part. What can I say? Cael is adorable and I love him almost as much as I love Dex.

This was a very, very solid entry into the THIRDS world, even if it was more focused on the relationships than the action. With a paranormal/urban fantasy type series, it’s very important to focus on character development, and this book nailed it for me. Charlie Cochet has built a well-crafted world and created characters that many people have fallen head over heels in love with. She’s quickly moved from a ‘new’ author for me to a I MUST OWN ALL her books author.

I look forward to book four, Rise & Fall, coming in February 2015. If you haven’t read this series, I highly encourage you to pick it up. You will love it!

You can buy Rack & Ruin here:

One thought on “Review: Rack & Ruin by Charlie Cochet”