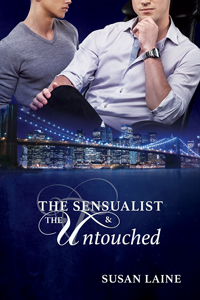 Title: The Sensualist & the Untouched

Blurb: Being over thirty is not an issue for Corey Paige. Being frigid and a virgin, however, is a huge problem for the only son of a newspaper magnate. No matter the risk, Corey’s intent on resolving both problems in one go.

Enter Lucian Allard, a wealthy hedonist with a notorious reputation at club Boudoir—and an unconventional sexual mentoring program for those who suffer from dysfunctions. As the two men begin a sensual journey to awaken Corey’s libido, Corey’s frigid body isn’t all that begins to melt. His untouched feelings also spark to life.

Though a family emergency puts a halt to awakening Corey’s senses and desires, Corey and Lucian grow closer as friends. Then an unexpected kiss from Lucian in Corey’s most desperate hour changes everything. Now Corey must decide if the program is still an aid or an obstacle to two lonely men trying to maintain a professional detachment but falling hopelessly in love.

Review: This book hit a number of firsts for me: my first review for The Novel Approach Reviews, my first book from the author, Susan Laine, and my first incredibly character driven novel. When I got this book to review, I pretty much hit the jackpot on those accounts, because this book took me for a serious ride.

As I said, this book is very much character driven. Corey and Lucian are complex characters that complement each other perfectly. As the title suggests, one is a hedonistic sensualist and the other is literally untouched – a self-professed frigid virgin. It might not sound like the perfect match, but believe me when I tell you it isn’t.

Told through both Corey and Lucian’s perspectives, the novel starts with Corey going to a psychologist for help with his frigidity. The help he gets is rather unconventional, as he is sent along to Lucian, who is a sexual mentor. Throughout the novel Lucian works hard at opening Corey up to the sensual side of life, and introduces him to all that is sensual: sounds, smells, taste, touch. Please note, I did say sensual and not sexual. Not everything is always about sex, though most of the time the end goal is getting Corey to reach that point.

If you’re looking for a fast paced story, this is not it. It is slow because of how character driven it is; however, I don’t think that takes away from the story. It actually enhances it. The detail to every setting is incredibly written. I was placed time and again in each room with Corey and Lucian, whether they were at Lucian’s penthouse, Corey’s apartment, Heather House, or Boudoir. I started to see, smell, and feel everything Corey felt. I even wanted to be there in person experiencing those things with him.

Susan Laine is a talented author. The level of detail is astounding and clearly researched. It makes me wonder if she knew all of these things beforehand, or if it was researched just for the book. If the latter, then this was an unbelievable undertaking.

I highly recommend this book. If you’re not a fan of character driven novels with a slower plot, give this one a chance. It might just win you over with the beautiful details and overall…sensuality.

You can buy The Sensualist & the Untouched here:

5 thoughts on “Review: The Sensualist & the Untouched by Susan Laine”