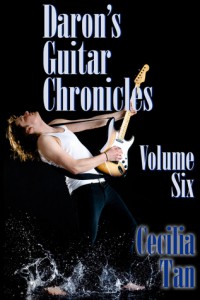 At a Glance: Cecilia Tan continues to deliver

Blurb: The latest installment of the award-winning web serial about coming out and coming of age in the 1980s.

After the tumultuous events at the end of the tour in 1989 leave Daron and the band reeling, it’s time to get off the road for a while. When an opportunity to stay in Los Angeles comes up, Daron takes it. There’s session work and music industry schmoozing galore to be done in LA, but Daron’s true reason for wanting to be on the West Coast temporarily is simple: Ziggy is in isolation drug rehab in Cailfornia. Daron wants to be nearby, even if Ziggy can’t communicate with the outside world. Is Daron prepared to deal with Digger, record company politics, and creative challenges alone?

Review: The first person narrative has rarely been used to greater effect than in Cecilia Tan’s online serial Daron’s Guitar Chronicles. The relationship between Daron and the reader is something I’ve never experienced before, and I don’t believe could have been achieved in the third person, limited or omniscient, as brilliantly as it’s been done here. Daron’s narrative is intimate, personal, and it’s, of all the oddest things, interactive. Or maybe it’s reactive. Whatever one wishes to call it, there are times during the reading of this, and the previous books, that I wanted to hug him, shake him by the shoulders, give him an earful, and then go right back to hugging him through his pain and torment. I’ve rarely ever connected to a character this way, maybe never on this level, and it’s a testament to Cecilia Tan’s storytelling that Daron exists as something more than merely a character on the page but as a person who feels real and alive, if only somewhere in the realms of pure imagination.

Daron’s Guitar Chronicles is a fictional autobiography, which is an oxymoron, true, but fits, as Daron himself is chronicling his life from a point in the future that’s unknown to readers. We can assume he’s settled but with whom we can only guess, nor do we know yet what it’s taken to get him to the point of sharing his memories with us, but these are variables with which the author can, and I’m sure will, still mine a wealth of storyline from this man’s life.

There is a Ziggy shaped hole in this installment of the Chronicles, and never has the presence of a character been felt so keenly than in his absence. For those who are unfamiliar, Ziggy is (or was) the lead singer of Moondog Three. The band was on the cusp of superstardom when Ziggy had a meltdown for the ages that landed him in the Betty Ford clinic and left Daron in the arms of Jonathan, the man Daron tries, almost desperately at times, to allow to fill the Ziggy shaped hole in his heart.

Volume Six reads like an interlude of sorts. Where Volumes One through Five are a sumptuous overture, this installment offers the chance for readers to pause and reflect along with Daron on everything that has happened to this point in his short life: the successes, the failures, the joy and the heartbreak. Moondog Three appears to be crashing just as quickly as they rose, and Daron Moondog, under threat of lawsuit, is no longer permitted to exist, forcing Daron to reclaim his surname, if not his identity, as his estranged father Digger Marks’ son. One of the loveliest juxtapositions in this book, from the view of the first person, is the role reversal–Daron is at loose ends without Ziggy, while Ziggy, who has always been the loose cannon and free spirit, is pulling his life together after rehab, jetting off to India, where he’s gone for a little spiritual reflection. It’s not until the bonus chapters at the end of the book that the reader gets a glimpse into Ziggy’s world, which is saddening and maddening at the same time, but sets up what will be the inevitable reunion with Daron. Daron and Ziggy have both learned some things about themselves in their time apart. What remains to be seen, though, is if what they’ve learned will help or further damage their relationship (at least for those of us who don’t follow the serial online).

With everything in limbo for Daron, including Ziggy’s exact whereabouts once he leaves rehab, we watch Daron take a crack at domesticity with Jonathan, an experiment that on the surface may seem a failure but did, in truth, serve a purpose other than to cause me to shout at my e-reader that Daron is with the wrong man. And then, eventually, didn’t I tell you so, Daron?, when the inevitable happens. But, as difficult and frustrating as it was to watch Daron going through the motions of playing house, this act is a necessary part of Daron’s evolution, and it allows the reader to get to know and love Jonathan a bit better. It would have been an insult to Daron, Ziggy, Jonathan, and to readers if Cecilia Tan hadn’t given thorough examination to this time in Daron’s life. No deus ex machinas, no pat answers and simple resolutions could have happened at this juncture. Everything that happens in this book, Daron’s growing and growing up, his cutting off ties with his father while strengthening his bond with Remo Cutler—Daron’s best friend and surrogate father figure—as well as his friendship with Jonathan and separation from Ziggy, is necessary to the whole of this saga.

As always, the author’s attention to detail is meticulous, not to mention impressive, never once weighing down the pace of the narrative. Reading this serial has been like getting an insider’s view of the music business, told to us by a young man who is charming, vulnerable, tenacious, and so easy to love. Daron’s relationship with his guitars and music transcends and informs his relationships with people, and serves as the foundation for his coming to terms with being gay, finding the courage to come out to his closest friends, and learning how to say what he feels and ask for what he wants. How this will play out in Volume Seven, when Daron and Ziggy reunite, promises to be epic.

The first five books in this serial made it onto my Best Books of 2014 list. There is no question Volume Six, and if I’m lucky this year, maybe even Volume Seven too, will make it onto the list for 2015.