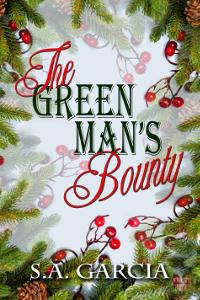 At a Glance: A worthwhile read, though the satisfaction came more from the exploration of rich traditions and the focus on traumatized, displaced children than from anything romantic or fantastical

Blurb: Can a Druid accept Christmas by helping WW2 orphans?

When a war-torn Druid meets his legendary Green Man, he discovers a new meaning to Christmas by helping Jewish orphans.

Review: I’ll have to admit, the blurb for this book is too skimpy for anyone to get a clear idea of what the book is really about. On the whole, it’s well-written on a technical level; there’s quite a bit of attention paid to religion – at least on the pagan side of things, in a manner of speaking. But we do get to enjoy a more diverse picture of paganism and how religion runs a full spectrum. There’s no black-and-white dichotomy of Christianism and paganism. In fact, we get to see – through Lynn – a nice blending of both in that he considers himself a Christian pagan and provides us a quick explanation toward the end of the book.

I do have issues regarding the way the book’s categorized, beyond it being a historical romance. It’s marketed as fantasy as well, but the fantasy is more about the atmosphere of the holiday season with so many different religions coming together in a lovely, harmonious way. There are no fantastical elements in the sense that there are no otherworldly or supernatural entities involved. There are several references to Mother Earth in addition to certain traditions practiced by Roger, who belongs to the Ancient Order of the Druids. He fondly refers to Lynn as his “Green Man”, and while that term certainly fixes the story firmly in its physical setting, it’s by no means a literal description of Lynn. Roger makes occasional references to Old Man Winter and Mother Nature as though they were actual characters, but those references appear to be more in line with the Druid’s way.

So, no, besides the rich pagan traditions that add so many layers and color to the story, there aren’t any fantasy elements I could see.

The plot itself is pretty idly paced, which works very well with the chosen period (the winter season and Christmas, not necessarily post-WWII). The conflict is also very light, if any, and that really only involves the orphaned Jewish children Roger and Lynn take in for Christmas and how they adapt to the temporary arrangements. There’s also the ongoing reminder of the illegal nature of gay relationships as well as paganism – at least in some places for the latter (residence and employment). But those are really barely touched on, and we’re simply reminded of those not because of actual situations that are explored in great detail, but because Roger mentions it a few times in addition to a couple of fleeting instances in which we’re shown the fear of discovery.

Since the plot revolves around the nature of Christmas and the plight of the orphaned children, I didn’t get much by way of the romance. Yes, there are sex scenes, and the book’s climactic moment – no pun intended – is a long, detailed erotic scene for our two heroes. But I didn’t sense much chemistry between Lynn and Roger, largely because the rest of the story’s heavily weighted in favor of those two points I mentioned. Not that it’s a bad thing, mind you, but if you’re looking for a sweet romance or even a torrid one, this book offers a little of both but not necessarily an emotionally convincing connection.

In the end, I still found this book a worthwhile read, though the satisfaction really came more from the exploration of rich traditions and the focus on traumatized, displaced children than from anything romantic or fantastical.

You can buy The Green Man’s Bounty here: