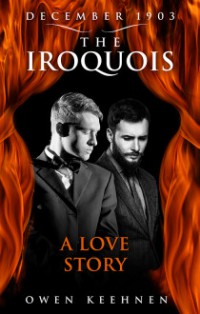 At a Glance: Owen Keehnen is able to construct a complete story that not only provides us with some great background material about theatre life in the early 20th century, but also the terrible cost of poor planning

Blurb: Chicago during the holiday season in 1903 was a bustling place. This is a tale of passion and love set against a backdrop of the tragic fire at the Iroquois Theatre which killed hundreds. As a love story it is the tale of two men from very different worlds who meet by chance on the street. Frankie is an actor working in the show Mr. Bluebeard which is currently playing at the Iroquois. Following a cast meeting, Frankie leaves the theater en route to his room at a local boarding house until the evening show. On the street he makes knowing eye contact with a handsome and dapper man. The two make small talk. The stranger introduces himself as Otto and in only a few moments the two head off to Frankie s boarding house. Though Frankie knows absolutely nothing about Otto s life outside of the room, they meet again the next night, and the next. As the cold winter wind howls outside the boardinghouse window, they make plans to run away and start a new life elsewhere. They agree to meet on the alley behind the theater that day after the matinee. Frankie has bought Otto a gallery ticket so that he can see him upon the stage. During that day s matinee tragedy strikes and the tragic inferno consumes the theatre. Will one or the other or both lovers perish in the blaze? Can love even survive in the wake of such unspeakable tragedy.

Review: At around 14,000 words, Owen Keehnen is able to construct a complete story that not only provides us with some great background material about theatre life in the early 20th century – at least in America – but also the terrible cost of poor planning, the absence of safety laws, and, in the middle of all of that, a love story in the process of blooming. I do want to emphasize that this novelette is a tragedy on many levels. If you’re looking for a romantic HEA, I’ll warn you that this book doesn’t guarantee anything, having a real-life tragedy for its dramatic backdrop, and its conclusion is something that works on a very realistic level. There’s so much mystery behind Otto that ending Frankie’s story the way Keehnen does makes a lot of sense.

The story, from the get-go, isn’t a happy one. Not only do we see Frankie’s struggles to survive as an actor and the lengths he’s forced to go to in order to make it, we also watch him find solace from his loneliness as a gay man by skulking in shadowy alleys, keeping an eye out for possible one-night-stands. When he and Otto cross paths one evening, he knows he’s found the one, and even Otto claims the same thing. There’s so much hinging on their moments alone that even their lovemaking is somewhat tainted by a mild undercurrent of paranoia. Frankie lives in a run-down apartment, and every movement seems magnified by the floorboards or the walls. So that even within the privacy of his home, he really can’t feel safe enough from discovery.

Frankie falls hopelessly in love with Otto, and in an uneven kind of relationship that bummed me out, Frankie shares everything about himself while Otto holds back. Right off the bat, Otto’s at a complete advantage, and it doesn’t take him much to woo Frankie with gifts and declarations of love. When the lovers talk about running away, I could still sense some odd distance from him, and after a certain point, I was questioning my own judgments about the character. It’s one of those kinds of characterization that I enjoy reading – the mystery, the riddle, the person with that quality that’s a little off in such a subtle way. He came across to me as a gray area, who can go either way: throw everything to the wind and run away with Frankie, or suddenly vanish without another word.

And it’s that mystery that muddies the waters following the tragic fire in the theatre where Frankie works.

The fire itself did happen, and the novelette ends with some notes regarding the incident. As can only be expected, so many people died in the fire – both audience and performers alike. With it being the early 20th century, you can only imagine the state of such buildings back then. Emergency exits, fire alarms, what have you – none of those existed then. In fact, reading through the detailed account of the fire, its progress, and the horrific aftermath called to mind the Triangle Factory Fire, another tragedy that makes me ill just thinking about it. The victims’ entrapment are similar. The desperate and ultimately doomed attempts at fleeing, particularly from the upper floors, are also the same.

What follows after the tragedy is almost dream-like in atmosphere and approach. Since we’re seeing everything unfold from Frankie’s POV (first person), we’re very limited in our understanding of how the tragedy affected his and Otto’s relationship. Scenes seem to blend into each other, almost as though we’re walking around in a daze.

There are a number of ways one can interpret the story’s denouement, the way I see it. And to Keehnen’s credit, every possibility I could think of works very well with the story, given the nature of the lovers’ relationship and the fact that we’re limited to Frankie’s POV – his biases, his weaknesses, his dreams. Every possibility is realistic, regardless of whether or not it pains us. It’s an effective – not to mention gutsy – way of following through Frankie’s story, and I’m grateful we’re not cheated out of it with something implausible or just plain far out there.

You can buy December 1903: The Iroquois here:

One thought on “Review: December 1903: The Iroquois by Owen Keehnan”