The Novel Approach welcomes Hayden Thorne today with an exclusive excerpt and giveaway of her new novella Sheridan Diggins and the Dead Horde, book one in an Adult Sci-Fi Romance Series from JMS Books.

The year is 8016, the planet, Cecilia, where questionable science and odd random events shape the daily lives of the descendants of colonists from Earth.

Twenty-one-year-old Sheridan Diggins flies a pre-owned clunker of an astro-cab for a living, struggling to survive. When his brother reminds him of a drunken promise he’s made to take him along in his astro-cab for a writing project, Sheridan doesn’t expect a humdrum day to turn into a nightmare involving a cursed space ship and corpses rising for a bit of mischief above ground.

Moreover, those undead creatures seem to be interested in no one else but Sheridan and Adley. Hungry and broke, Sheridan works to solve the bizarre mystery with the help of a trigger-happy teenage brother and a hapless tow ship owner. And what he uncovers is something neither questionable science nor bottomless pints of Owen’s Galactic Beer can prepare him for.

Five more creatures were vaporized under the relentless spray of deadly purple lasers in the shape of hard-boiled breakfast. Sheridan turned around, grabbing hold of Adley’s arm, and dragged the boy along with him.

The two of them raced each other across the meadow. Of course, neither also knew where they were headed. As long as they got away from their rotting pursuers, they were good. Unfortunately it proved to be a damned sight more difficult than expected.

One of my inspiration sources for this novella series. I had loads of fun reading Adams’ book and decided then to try my hand at writing a sci-fi comedy.

Bodies kept popping out of the ground directly in their path, and Sheridan and Adley were forced to swerve or change directions completely. For those buggers that popped up from the ground at the last minute, Sheridan and Adley were compelled to leap over them, shrieking in horror and disgust because once liberated from the ground, those monstrosities reeked like no other, their fumes rising in thick pillars of utter vileness. Leaping over them forced one to breathe in the noxious cloud of rot. And for the first time ever, Sheridan was tearfully grateful for going about his day deprived of lunch.

“What the hell’s going on here?” he panted, glancing back over his shoulder a couple of times. Dead-undead things, having just liberated themselves from their burial sites, staggered to their feet and followed the two of them. None could run, thank the skies, but they were practically oozing out of every scrap of uninhabited land within twenty feet of him and Adley. “What? Do we smell or something? Pheromones? What?”

Adley just gasped beside him, his breathing loud and ragged. They eventually reached one end of the meadow, which was not much more than loose, dry soil and large, scattered stones. The ground rose, though, at a gradual incline, and the loose soil gave way to solid rock that offered a lot of hand and footholds. The two practically launched themselves against the rock and proceeded to race each other up the rough, difficult surface like colorful, oversized lizards.

I loved this sci-fi comedy series as a kid. This was probably the first sci-fi show or movie I watched that made fun of its genre. I realized then that sci-fi ain’t all philosophically serious Star Trek.

About a third of the way up, Sheridan was ready to roll over and die. He’d never been an active sort, and all this running surely would’ve taken care of his fitness for the rest of his life. He was drenched in sweat, and he could swear he was coming down with asthma. And his muscles were threatening to lock up from the extreme shock of moving them so much in such a short amount of time.

Once he felt they were relatively safe – because how many freshly risen corpses could realistically scale the rocky hillside like veteran mountaineers? – he found a good, secure foothold on a small ledge. Gingerly turning around and making sure to keep a firm hold of the rock face with one hand, he pulled out his pistol from his jacket, fired it up, and looked down.

Yes, those corpses were trying to follow them up the hillside to varying degrees of success, comical and otherwise. Since none of them were fully intact the way a live human or humanoid was intact, body parts – particularly fingers – kept tearing off, leaving them quite helpless. Sheridan sighed, shutting off his weapon. Finally, some good luck. 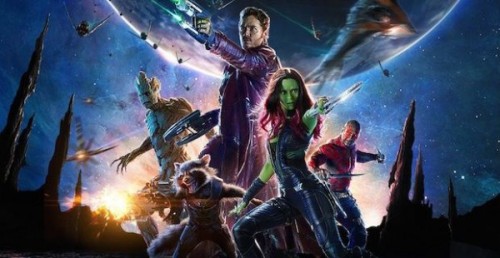 Despite its flaws, ‘Guardians of the Galaxy’ was great entertainment. I saw this film a few months after reading Adams’ novel, and the inspiration to write a sci-fi comedy surged to crazy heights.

From the looks of things, those monsters were mindlessly determined to climb, which meant wearing down what was left of their extremities till dusty stumps were all they had. Even then, Sheridan suspected they’d continue to fight against overwhelming odds so they’d have nothing more than heads and torsos to go by after half an hour of this. A couple had reached the point of no return, in fact, and had no other choice but to look up and regard Sheridan with looks of dull-witted confusion. There were others that managed to get a little farther ahead but eventually had their overworked appendages shred and tumble down the slope in disgusting little avalanches. For those, there’d be a half-second of what passed for amazement before they’d either slide back down the hill or tumble down, sometimes bumping into less fortunate comrades and taking those along with them. Here and there, what appeared to be dust clouds made of dried skin, fabric, and tissue rose up as hurtling dead undead things landed at the bottom of the hill. Sheridan could even hear an occasional “whump!” from where he was, still clinging to the rock.

And for the briefest, maddest moment, Sheridan actually felt a certain melancholy connection with his pursuers. There was something rather heartbreaking at the sight of a determined yet ultimately doomed attempt at reaching a goal. Talk about the most bizarre kind of metaphor, he noted, shaking his head sadly.

This is movie I never got to see, but I’m about to fix that oversight. Thank you, Netflix.

Of course, these mini-tragedies meant being left with the fresher corpses, but at least those were only a small portion of a pretty diverse group of shamblers. Sheridan spotted at least two that managed to avoid getting pinged by their rotting counterparts, and those were steadily making their way up the hill. True, they were slow and rather clumsy, barely holding on to the rock because their dead brains and non-functioning senses failed to direct them accordingly, but it’d be a mistake underestimating them. At least they’d be easy to vaporize when the time came, and that was some comfort. With a tired sigh, Sheridan turned around and continued to climb, following Adley as the boy all but clawed his way frantically to the top, still whimpering in terror.

16 thoughts on “Exclusive Excerpt and Giveaway: Sheridan Diggins and the Dead Horde by Hayden Thorne”