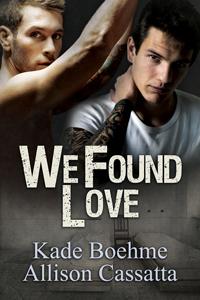 At a Glance: Sometimes two authors will write a book together, and one plus one really equals more.

Blurb: It’s no surprise Riley Connors is dealing with issues. He was kidnapped as a young boy, and his parents abandoned him after his newsworthy return. He bounced from foster home to facility and back. Now an adult, ghosts from his past continue to haunt him. After a suicide attempt, he is locked away in Hartfield so that people can make him tune in to emotions he has tried to bury.

Hunter Morgan had the kind of love that spans ages. But the stress of college and adulthood became too much to handle, and the love of Hunter’s life turned to drugs. After he overdoses, Hunter finds himself soaring out of control on the same miserable path. His brother finds him and calls an ambulance, and the sister Hunter would rather not have calls it a suicide attempt, landing Hunter in Hartfield.

Finding love isn’t easy, but it can happen under the most dire circumstances. Together Hunter and Riley may be able to grow from their pain. But they will need to learn to live for themselves, letting love come second.

Review: Sometimes two authors will write a book together, and one plus one really equals more. Kade Boehme and Allison Cassatta have written a very powerful story that tugs on our emotions, one that makes us cringe and cry, but one that has hope. First, our hope is that Riley and Hunter can just heal and get out of Hartfield, then we hope they can be happy and healthy individuals, and finally we hope they can trust in and enjoy the love they fall into.

The beginning of the story explodes off the pages; it is dark and very dramatic. We are sucked into the story quickly. Riley is a troubled young man who, we come to discover, has been abandoned into the care of a mental health facility. Landing in Hartfield is Hunter, a bit of a wastrel, who has self-medicated himself into an involuntary rehab session after a suspected suicide attempt. These two men have an intense introduction that sets the stage for the next few weeks they will be together.

This is not your everyday romance novel, and the authors are careful with the pace of the story, giving us time to absorb the realities of the hospital and the history they each have, but still allowing the glimpses of hope and attraction to build up and creating a sense of anticipation for the reader. I am pleased with the respect shown by the authors in their descriptions of the mental illnesses of the characters in this book. They were blunt but not crude, and it added to the realism of the story without being gratuitous. The focus remained positively on the attraction between Riley and Hunter throughout the story and also emphasised the hope we felt.

I actually found this to be a fairly quick read. I enjoyed the dialogue in the book, modern and snarky, reflecting the characters well. The character development and the realistic descriptions of the hospital, and the routines inside of it, worked together to create a believable setting for the story. The instant connection between the MCs was allowed to grow deeper at a believable pace, not an insta-love situation but rather an intense bond that had the possibility of becoming love. When Hunter is discharged, leaving Riley behind, the exchange of letters lets us see the growth each MC goes through, developing skills to manage life and their own good mental health. I found myself grinning madly when Hunter and Riley were reunited, and I could easily see their HFN growing one step at a time into a HEA.

You can buy We Found Love here: