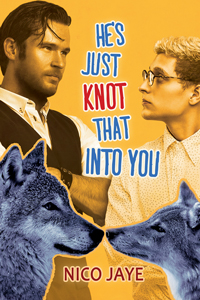 Title:  He’s Just Knot That Into You

At a Glance:  The story was cute and I loved the characters, but there just seemed to be so much that wasn’t explained or that didn’t seem to fit in.

Blurb:  When Tanner moves to Chicago for a new job, he experiences his First Shift, a revelation that signifies he’s met his mate since the last full moon. The only problem? He doesn’t know who it is. To find his mate, he enlists his new assistant Jon to arrange a series of dates, but each one turns out more disastrous than the last.

With the next full moon quickly approaching, Tanner finally determines the identity of his true mate. Unfortunately, Jon has since disappeared, and Tanner must now begin a new search. Is it really Jon’s family crisis pulling him away, or is Jon just not that into him?

Review:  Tanner is an alpha wolf; although, alpha wolf in this story, as far as I could tell, is just the more dominant of the wolves. There doesn’t seem to be packs or anything, you’re just either an alpha or an omega, but this wasn’t really explained clearly.

The concept that you don’t shift until the first full moon after you come in contact with your mate was also different, and kind of an interesting idea. Although I liked the idea of this, I still was confused because, based on conversations Tanner had with his mother, or him recalling things said by other family members, when you meet your mate you would know, but that isn’t how the story played out. Tanner had come in contact with his mate, but it took almost a month of seeing Jon every day, and going on “dates” with others, for him to realize Jon really was his mate. I did love the interactions between Tanner and Jon; they were so cute and sweet. Yup, they were adorable!

Without giving too much away, the other conflicts that popped up more toward the end of the book, with the magic and curses, was just a little too out there for me and pulled me out of the book, especially since there isn’t really any backstory or anything related to it.  I just didn’t find the additional twist necessary, and, in my opinion, it kind of took away from the story.

He’s Just Knot That Into You is cute and I loved the characters, and even the twist on words in the title, but there just seemed to be so much that wasn’t explained, or didn’t seem to fit in, that it left me confused and feeling unconnected to parts of the story.  There were a few times I laughed out loud and at one point, I was even a little embarrassed for one of the characters. I can tell you this: I am pretty sure I will NEVER look at mashed potatoes the same way again!

You can buy He’s Just Knot That Into You here: