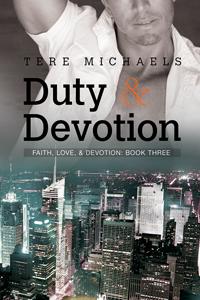 At a Glance: Duty & Devotion was a well-written and compassionate look at what it takes for two men to come to terms with the rest of their lives.

Blurb: A year after deciding to share their lives, Matt and Evan are working on their happily ever after—which isn’t as easy as it looks. As life settles down into a routine, Matt finds happiness in his role as the ideal househusband of Queens, New York, but he worries about Evan’s continued workaholic—and emotionally avoidant—ways. Trying to juggle his evolving relationship with Evan and his children, Matt turns to his friend, former Seattle Homicide Detective Jim Shea.

The continued friendship between Matt and Jim is a thorn in Evan’s side. Jealous and uncomfortable with imagining their brief affair, Evan struggles to come to terms with what being in a committed relationship with a man means, and the implications about his love for his deceased wife, the impact on his children, and how other people will view him. His turmoil threatens his relationship with Matt, who worries that Evan will once again chose a life without him. But now, the stakes are much higher.

Review: With the third installment of Tere Michaels’ Faith, Love, & Devotion series, we return to the domestic life of Evan and Matt and their rowdy brood. The oldest, Miranda, is off at college, leaving the younger three, and Matt as a househusband, chief bottle washer, and cook. Apparently having given up on the idea of returning to college, Matt is still seeking to find that thing which can be his alone. Evan is a near disaster as he simultaneously pushes Matt away in public, seeing him as a dirty secret, and loves him with everything he is worth in private. The children adore Matt and add a really light touch to this ongoing angsty relationship.

Evan must somehow come to terms with having Matt be a visible presence in his life, and Matt, who has the patience of Job, tries his best to be aware of all of Evan’s worries and fears. A visit from Jim and his lover Griffin sends Evan into a tailspin, initially, but it is actually Griffin who will help Evan realize he must either fully commit to Matt, or set him loose. Throw in a wounded set of in-laws and Evan’s crazy work schedule, and you have a recipe for near disaster that only Evan can fix.

I enjoyed this revisit with Matt and Evan much more than the first time. Matt is just a delight. Sarcastic, endlessly patient, and remarkable with the kids, he not only keeps Evan tethered to sanity but forgives him all his foibles—and Evan has lots of those. Evan is a mess—inside, this man is more turmoil and doubt than anyone should have to carry around. It’s the labeling that really scares him. Is he gay? Bisexual? Was his marriage really a sham? On and on goes the litany of questions and fears that Evan cannot seem to put aside, and through it all, Matt stands stoic, loving, and committed.

Tere Michaels delved deep into the emotional lives of her characters in this novel. I felt like these guys were living, breathing people who were dealing with real world issues and just doing their best not to lose sight of how much they loved each other. Nothing in this novel was easy or trite; instead, these men clawed and fought their way through every up and down and took such huge steps with each other that really required huge trust. And that is exactly what made this novel so good—the building trust that Evan has for Matt, and Matt’s unwavering loyalty to his man. Duty & Devotion was a well-written and compassionate look at what it takes for two men to come to terms with the rest of their lives.

You can buy Duty & Devotion here: