The Novel Approach welcomes author Jaycee Edward on the Dragons blog tour today. Enjoy Jacyee’s guest post, then be sure to click on the Rafflecopter widget below to enter for the chance to win a $15 Gift Card from Evernight Publishing.

In Dragons, Will gives young Joey a stuffed purple dragon. Years later, when Will runs into Joey again, he’s shocked to see Joey still had the dragon.

I’m not sure why he was so surprised. I adored stuffed animals as a kid. I didn’t have many, but the ones I did have were loved until the stuffing burst from their seams. I think most of us probably had one or two particular stuffed animals that gave us such comfort as kids that we just could never bear to part with them. I mean, how do you just throw your childhood confidant in the trash?

I had two very special such stuffies. First was Tiny – an oversized, very flat, tan dog with a big darker-brown spot on his back where you were obviously meant to lay your head. He had long, floppy ears just right for drying tears. Tiny originally belonged to my older brother, but was handed down to me and lived the rest of his life across the foot of my bed. In his short existence, he was hugged, cuddled, thrown up on and cried on more times than I can count. He was my non-judgmental, pretend boyfriend that let me practice kissing without ever telling me I was doing it wrong. He captured and silenced my sobs whenever life didn’t treat me fair and he helped me get through those awful, awkward pre-teen years.

As I grew up, stuffed animals gave way to real boys; Tiny got neglected and at some point, he vanished. I’m not sure when that happened. I was busy with teenage things. I’m sure my mom was counting the minutes until it was safe to get rid of him. He was threadbare and ugly by then, but like the Velveteen Rabbit, it meant he’d become ‘real’. I wish I at least had a picture of him to show you, but I don’t.

The only stuffie to survive, was Bunsy, a small rabbit – the very first stuffed animal that was all mine, not a hand-me-down. He was easy to clutch and carry, and often went outside to play with me. Bunsy started out white and fluffy, but as you can see from the picture, he’s now the dingy gray that stuffed animals become after years of being loved. I’m not sure how he managed to escape all my mom’s decluttering campaigns. Maybe because she had a real rabbit named Bunsy when she was a child. However he managed it, I’m glad he did, because he now sits on a shelf in my bedroom, still watching over me when I sleep. 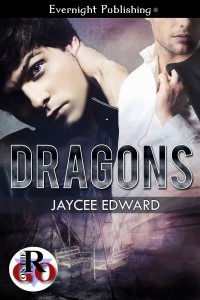 Blurb: A chance encounter in a hospital waiting room between twenty-two year old Will Messina and sixteen year old Josiah Pinkerton ends with a gift of a stuffed dragon off the hospital gift cart and a memory neither of them can shake.

Five years later, when a lonely, buttoned-up Will ventures into a gay club, he spots a pale, leather-clad specter with violet eyes tracking his every move. Will realizes he’s being watched by the grown version of the boy who’s haunted his thoughts for years.

Joey recognizes Will, but he’s no longer the sweet, brown-eyed boy worthy of Will’s attention. He’s damaged and defective and lives in a different world than Will now. When his childhood crush makes his way across the bar, Joey doesn’t have time to decide whether to be enchanted or dismayed because, unless he turns and runs, those worlds are about to collide.

About the Author: Jaycee Edward is no longer seventeen years old but don’t tell her that. She’s actually a tad older and lives in northeast Ohio with her handsome husband and one, big gorgeous dog. She has two grown stepdaughters and is proud to be the ultra-cool Nana to two amazingly incredible grand-teens. Jaycee loves pistol shooting and is has earned her Bar 7 Sharpshooter status in the Winchester/NRA Marksmanship Qualification Program and hopes to someday reach the level of Expert Marksman. She is proud to be the token liberal at her gun range. Jaycee knows way too much about the inner workings of Walt Disney World and anything related to One Direction. She’d love to pull you into the rabbit hole with her. All you have to do is ask. Find her there or contact her through social media.

4 thoughts on “Guest Post and Giveaway: The Dragons Blog Tour With Jaycee Edward”