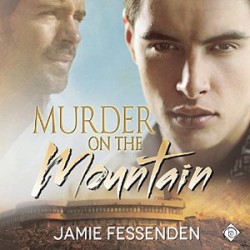 Title: Murder on the Mountain

At a Glance: The narrator in this case was okay, but I didn’t love his rendition of this book.

Blurb: When Jesse Morales, a recent college grad who aspires to be a mystery writer, volunteers to work on the summit of Mt. Washington for a week, he expects to work hard. What he doesn’t expect is to find a corpse in the fog, lying among the rocks, his head crushed. The dead man turns out to be a young tourist named Stuart Warren, who strayed from his friends while visiting the mountain.

Kyle Dubois, a widowed state police detective, is called to the scene in the middle of the night, along with his partner, Wesley Roberts. Kyle and Jesse are instantly drawn to one another, except Jesse’s fascination with murder mysteries makes it difficult for Kyle to take the young man seriously. But Jesse finds a way to make himself invaluable to the detective by checking into the hotel where the victim’s friends and family are staying and infiltrating their circle. Soon, he is learning things that could very well solve the case—or get him killed.

Review: Murder on the Mountain marks my first foray into M/M audiobooks. I’ve been reluctant to dive into the audiobook pool because I usually have a VERY vivid movie going on in my head when I read books—a narrator may or may not capture my take on that movie. I had several friends recommend this book to me, so I thought I’d try it in audio.

I really liked the story of Jesse and Kyle. They meet after a tourist named Stuart has gone missing, and Jesse discovers the body after everyone on the mountain goes to look for him. Jesse has had a kind of strange afternoon; he remembers seeing Stuart – and his friends – earlier in the day, and he’s quite shocked to be the one to discover the body.

After the authorities are called, Jesse meets detectives Kyle Dubois and Wesley Roberts. Since he found the body, the detectives are quite interested in his statement. He immediately feels an attraction to Kyle, but he tries to keep his head in the game for the case at hand – which he believes is murder. It turns out that Jesse is an aspiring mystery writer, and this makes the detectives more than a little skeptical.

As the detectives begin to work the case, though, Jesse rather inserts himself into things by staying at the hotel where the rest of the friends and family of the tourist are staying. It turns out it is a wedding party, and the wedding was to have taken place that Saturday. There are a number of potential suspects, including the fiance’s family, and Stuart’s brother and best friend—it seems all have something to hide.

Kyle is quite unhappy at Jesse’s poking around, but he can’t help but be grateful for the information that Jesse is able to get by befriending the party. He also admits a number of things to Jesse, including his bisexuality and his devastation at the loss of his wife five years earlier. While they are getting to know each other, Kyle also worries that Jesse is putting himself right in the crosshairs of a killer. What’s to stop the murderer from going after Jesse if he – or she – determines that Jesse is getting too close?

There are a number of twists and turns, as you would expect with a good murder mystery. There might have been a number of motives for killing Stuart, but there are no clear clues or physical evidence that would tie any particular person to the murder. A lot of skeletons in a lot of closets are also revealed. As the whole sordid episode unravels, there is a suitably exhilarating climax.

I really enjoyed both the mystery part of the story as well as the budding romance between Jesse and Kyle. Kyle is actually interested in someone for the first time since his wife’s death, but he’s having a little trouble dealing with that emotionally. Jesse is a young guy who is not afraid to say what it is he wants. He really wants Kyle and he is very upfront about it. Both characters were likeable and believable. I also liked Kyle’s partner Wesley. He has Kyle’s back and his best interests at heart. As for the motley crew of family/friends/suspects, they made for an interesting and circuitous tale with several surprises thrown in for good measure. I would definitely recommend this story to any mystery lover.

However, I’m not sure I’m sold on audiobooks. The narrator in this case was okay, but I didn’t love his rendition of this book. I would have liked a little more energy, I think – although I thought he did a good job with Jesse’s part in particular. I’m reserving judgment, but I’m not 100% convinced that audiobooks are for me. I’ll try a few more before I decide, but definitely this does not convince me to steer away from reading my books.

You can buy Murder on the Mountain here: