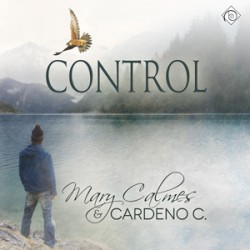 At a Glance: It still amazes me, listening to these audiobooks, that it is one person doing all the voices. Greg is a master at it!

Blurb: Vy Aleknos is the leader of a hawk shifter flock. Openly gay since he was a teen, Vy is proud and self-assured on the outside, while secretly worrying he’ll be forced to spend his life alone because two males can’t be mates. When bear shifter Robert Cimino appears in Vy’s small town, Vy realizes his concerns were unfounded — he has a male mate, and a sexy, dominant one to boot.

Robert is a bear shifter who refuses to shift. Immediately attracted to Vy, he deviates from his normal pattern and seeks more than a one off with the powerful, bristly hawk. But Robert’s affections are rooted in his human form, and when Vy discovers Robert doesn’t recognize him as his mate, he pulls away. If Robert wants to stay with Vy, he must convince a man deeply ruled by his animal instincts to give their relationship as humans a chance.

Review: I have to be honest, when I read the ebook of Control, it wasn’t my favorite. I didn’t hate it but I just didn’t really care for Vy. He came across as arrogant and kind of whiny. A couple times while reading it, I literally sat here saying out loud, “Yes, we know, you are the kuar of the ket…I get it!” When I saw this available for review, at first I didn’t even consider requesting it, but then I saw who narrated it and had to give it a chance. Greg Tremblay has quickly become a favorite narrator for me, and even more so after listening to Control. He took a character I didn’t particularly like and made me see him differently.

When I read Vy, he was arrogant and whiny; listening to GregTremblay read Vy, though, he came across more as vulnerable and uncertain, which made me connect with him a little more and be able to enjoy the story better. It still had the “okay, we get it” moments, but I was much more connected with the characters while listening to the audio than I was when reading the book. Now, Robert I liked when I read the book, and fell for him even more in the audio. He is the more calm and rational of the two of them, and just wants Vy to want him for him…so sweet! I said it in a previous review, but it applies here also, and deserves to be said again, Greg Tremblay does an amazing job making the voices of the characters unique and individual. In this story, with the different POVs, you always can tell who it is that is speaking just by their voice. The accents are awesome and Vy’s second in command, Lou, might be one of my favorite female voices I have heard done by a male narrator. It still amazes me, listening to these audiobooks, that it is one person doing all the voices. Greg Tremblay is a master at it!

You can buy Control here:

One thought on “Audio Review: Control by Cardeno C. and Mary Calmes – Narrated by Greg Tremblay”