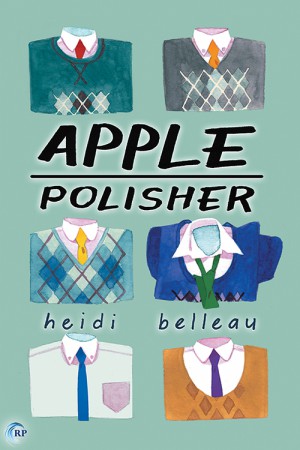 About the Author: Heidi Belleau was born and raised in small town New Brunswick, Canada. She now lives in the rugged oil-patch frontier of Northern BC with her husband, an Irish ex-pat whose long work hours in the trades leave her plenty of quiet time to write.

She has a degree in history from Simon Fraser University with a concentration in British and Irish studies; much of her work centred on popular culture, oral folklore, and sexuality, but she was known to perplex her professors with unironic papers on the historical roots of modern romance novel tropes. (Ask her about Highlanders!)

When not writing, you might catch her trying to explain British television to her newborn daughter or standing in line at the local coffee shop, waiting on her caramel macchiato.

About the Cover Artist: Vivian Ng is an illustrator and occasional comic artist living in Mississauga, Ontario, working mostly in watercolour, ink, and digital media. Vivi’s hobbies include watching children’s cartoons, reading fanfiction, and drawing entirely too much fanart.

This straight-A student has a dirty little secret.

Christian Blake dreams of being a kindergarten teacher, but making the grade means maintaining a squeaky clean image: no drinking, no drugs, no swearing, no sex. And definitely no falling for his new roommate—tattooed bad-boy Max, who may or may not be a drug dealer.
Most of all, it means no working at a porn store. But Christian’s aunt has cancer, and her beloved Rear Entrance Video will go bankrupt if Christian doesn’t take over managerial duties. Soon enough, Christian finds himself juggling sticky twenty-five cent peep show booths, a blackmailing employee, and a demanding professor who likes to make an example of him.

And then there’s Max, who doesn’t know anything about the store, but hates Christian’s preppy sweater vests and the closet Christian forces him into when they’re together. Max just wants Christian to be himself—even though Max is keeping secrets of his own. Christian struggles to find the impossible balance between his real life and the ideal one he thinks a teacher needs to live . . . all while trying to keep his aunt’s dream alive without losing his own.

This gamer geek has a pretty little secret.

Art student and MMORPG addict Robert Ng has always been a loner, but he’s recently made it his goal to make more (IRL) friends. Which is how he winds up working nights at Rear Entrance Video, shilling sketchy porn and blowup dolls as a favor to his roommate. The longer he works there, though, the more he realizes he’ll never be truly happy until he becomes the person he is online: his female persona, Bobby.
Bobby is cuter and funnier than Rob is, and a thousand times more popular with boys. Becoming Bobby IRL presents its own set of challenges, though . . . especially when you’re sitting on the fence between two genders, only one of which has caught the attention of your seriously cute customer/classmate.

Dylan Ford is a six-foot Inuit comic book artist who always says what’s on his mind, and screw anyone who doesn’t like it. As rough as he appears, though, Dylan has a soft spot for Rob. But will out-and-proud Dylan still want Rob if he’s not all man?

This macho jock has a crooked little secret.

College hockey player Austin Puett is in trouble. Unless he starts treating his flamboyantly gay roommate with respect, he’ll lose his room and his job at Rear Entrance Video. But Austin’s got a not-so-straight secret of his own: nothing turns him on more than insults implying he’s gay—even though he’s definitely not!—and all his old coping methods have stopped working.

Use coupon code REVRECOVER to receive $2.00 off the ebook price of Apple Polisher!